The City of Arts and Sciences, developed by Santiago Calatrava, is a large-scale urban recreation center for culture and science. Set in the old dried-up river bed of Turia, midway between the old city of Valencia and the coastal district of Nazaret, this city covers an area of 350,000 square meters.

The predominant idea of the project was to restore the neglected area of Valencia, as well as to provide a linear park that stretches through the city. The project would be one link in a chain, that was designed, to take a leap into the third millennium. The series of five buildings planned for this city will join the cultural axis linearity accompanying a sense of it and will provide an open and public space, also it will add features for the Valencians.

2. The Metamorphosis of Space | Santiago Calatrava

Throughout almost two kilometers, the project has been the hallmark of unsurpassed Calatrava. Often named as a ‘City Within a City’, the creation of the Valencian architect caused amazement and surprise. The project respects the traditions of the Mediterranean Sea and the light blue and white blend with the pseudo-futuristic architecture of the author. The old traditions of the city led to these monumental modern sculpture. In addition, large bodies of water united all parties and gave a sense of work. The City of Arts and Sciences has taken a starring role in Tomorrow land, Disney’s latest blockbuster. “Calatrava’s architecture is just phenomenal and inventive and exciting. It’s very skeletal, like you’re looking at the vertebrae of a dinosaur or prehistoric fish“, said Chernov. “You walk into that place and you never want to leave. That’s the vibe we wanted for Tomorrowland“. 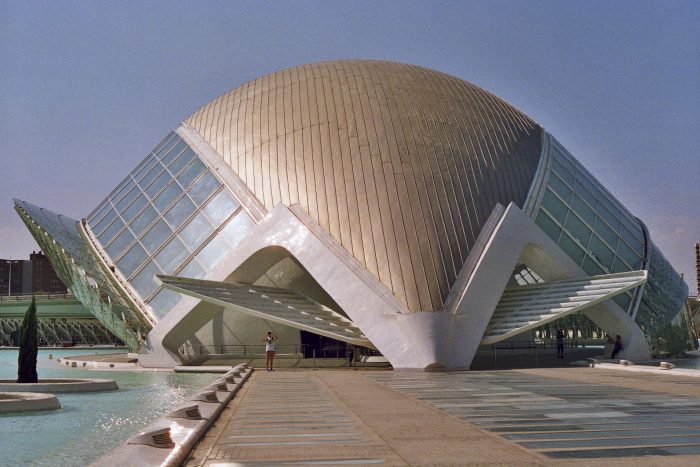 The City of Arts and Sciences consists of several places:

It is the main building of the complex, located on the western side of the axle and is a landmark. This component represents the commitment to art, spreading music, dancing and theater. Their suggestive reference to the nautical activity is almost like a metaphor of a boat that had run aground on the ancient riverbed of Turia. The building has an area of 37,000 square meters and more than 70 meters in height. Inside, you will find four large rooms: the main hall, the Aula Magistral, an amphitheater and Theater and House and also a showroom. The spaces are varied and numerous.

Cantilever slabs at different heights are joined by stairs hidden between the cover’s metal side, in addition to the elevators with panoramic views of the city. The cover or ‘pen’ is the most spectacular structure with 230 meters long and more than 70 meters height while the two ‘shells’, which embrace the buildings, are constructed of steel sheet with an approximate weight of 3,000 tons lined by the outer ceramic coating. The maximum dimensions of the building envelopes are up 163 meters long and 87 meters wide.

Used in its construction:

Located on the southern facade of the complex. The structure, known as ‘L’Umbracle’, is a promenade and a parking garage built within an open arcade, providing a contemporary reinvention of the winter garden. This is an elongated structure that forms an open-air space. Its interior houses include all kinds of vegetation in the area of Valencia (Jara, lentiscus, rosemary, lavender, honeysuckle, bougainvillea and palms) as well as a tour of contemporary sculptures.

Calatrava designed it from the outset in white concrete, like the rest of the ensemble, with a heavy metal. Its structure resembles a lattice, with a succession of 55 fixed and 54 floating arches of metal. The maximum height from the bottom of the arches fixed to the floating key is 18 meters. The tour covers the floor with wood Teak, a tropical wood suitable for installation in outdoor areas, as it supports the assault of wind and rain with a minimum wear. 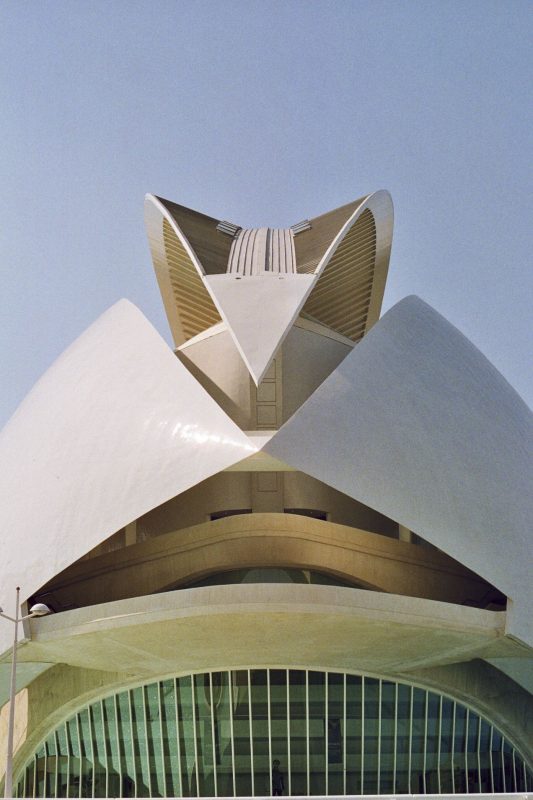 This creation of Calatrava has become perhaps one of the most representatives of the City of Arts and Sciences. The distinct clearly look like eyeball has been placed on the center stage. It is located on the L’Umbracle and flanked by two rectangular ponds to the north and south.

L’Hemisfèric hosts technological and educational rooms, IMAX rooms, audiovisual, art rooms, and a planetarium. It can give classes, makes presentations, or even entertainment shows.

The building consists of a reinforced concrete structure except the casing is metal, based on a screen foundation and large slabs of a song. The area is composed of concrete gunnited on a metal structure formed by meridians. The rigidity of the structure is achieved through reinforced concrete walls that enclose the area around the accessibility, and through the forging of the different floors and beams of the sloping terraces.

The metallic covering is composed of five arches cut section drawer which are supported on tripods at the ends of the reinforced concrete. The arches are linked together via profiles laminated beams and curved drawer.

Coating materials are used to seek the balance between the concrete surfaces and the use of the building: granite flooring with different shapes and treatments, carpeting in the room paraments and ponds, ‘Trincadis’ in the dome of concrete and ponds and Carpentry in stainless steel.

It is 40,000 square meters on three floors. From the outside, its image appears to be the skeleton of a prehistoric animal or perhaps a huge whale. The particularity of being an interactive museum of science makes it a special place for youth and children. Unlike any other conventional museum, the late signs of ‘prohibited touching’ of each sample invite them to come and participate, learning in each of the interventions. Its appearance is descontracturado playful and striking as the huge ‘bones’ which was coined.

Its design is based on the repetition of the asymmetric structure in the shape of ribs. These ribs are connected by metal white horizontal longitudinal elements that surround the front glass. As is often repeated in Calatrava’s designs, the structure is a protagonist and always in sight. 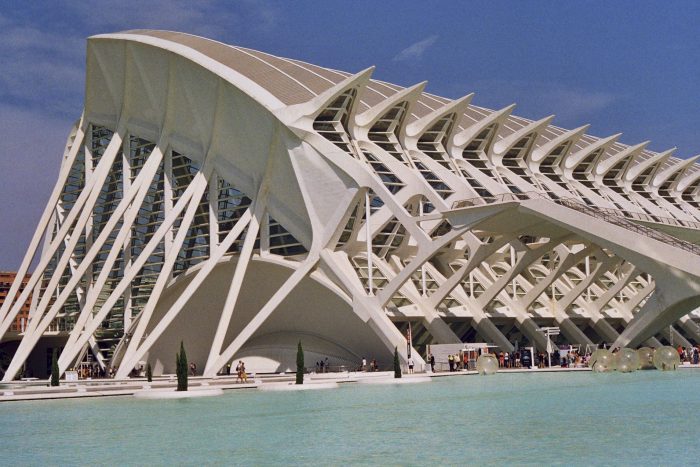 Conceived as the final element in the City of Arts and Sciences complex, the Valencia Opera House has been designed as a series of apparently random volumes, which become unified through their enclosure within two symmetrical, cut-away concrete shells. These forms are crowned by a sweeping steel sheath, which projects axially from the entrance concourse and extends over the uppermost contours of the curvilinear envelope. The resulting structure defines the identity of the Opera House, dramatically enhancing its symbolic and dynamic effect within the landscape while offering protection to the terraces and facilities beneath.

The different volumes of the building are stacked between horizontal promenade decks, which cantilever off the side of the structure. The fully air-conditioned auditorium, located within the 1300 seat opera house, occupies the central core. This core is set within an acoustically shaped shell embedded within the cluster.

With a volume of 110,000 square meters, it became the largest European oceanographic and the third globally. Its 45,000 species from around the world make the visit a thorough understanding of the deep sea. The cover in the form of a water lily, is the work of the architect Felix Candela. The building’s oceanographic emblem consists of hyperbolic paraboloids constructed in concrete. The shell surrounds the glass walls enclosing the volume.

It is a suspension bridge that connects the south side with Minorca Street, whose 125 meters high pillar is the highest point in the city.

The Agora is a covered plaza and a space designed to hold a variety of events such as concerts, performances, exhibitions, conventions, staging of congresses and international sports meetings. Many important events have been held in this building including the Freestyle Burn Spanish Cup in 2010 and the Christmas Special Program.

It forms part of the project, it is constructed of three skyscrapers of 308, 266 and 220 m. The project has been put on hold and the possibilities that it will be finished are seen by many as doubtful. Yet the Valencian architect Santiago Calatrava is facing legal action from his home city of Valencia because parts of the opera house roof at his City of Arts and Sciences complex are falling off just eight years after completion. He has been heavily criticized for the cost of the City of Arts and Sciences complex and was accused of ‘bleeding Valencia dry’ over alleged fees of €100 million for the showpiece cultural center, despite the coming in four times over budget at over €1 billion. 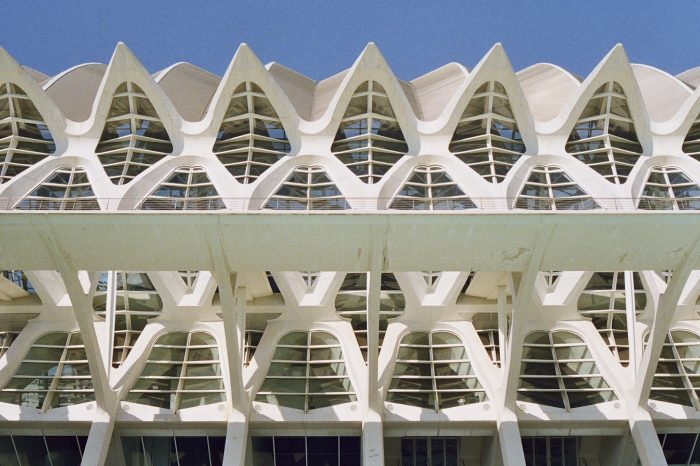