Chicago Spire, the iconic twizzling edifice by Santiago Calatrava has finally entered to the museum of unconstructed dreams in Chicago, also known as the ‘birthplace of skyscrapers’ among the tallest buildings in the world. The development initiative halted due to a literally sky-piercing budget and got buried afterward under the 76 feet deep grave. Being the first windy-city project of Calatrava, the original design served its name through a slender tower elegantly tapered upwards to penetrate the clouds with a needle. The design got continuous revisions as per requirements of the city’s authority and the resultant structure came in a much wider and blunt form, interestingly replicating a standing drill bit.

READ MORE:
Jeddah Tower: 10 Things to Know About The World's Tallest Building in 2020

“I know that Chicago is an Indian name, and I can imagine in the oldest time the Native Americans arriving at the lake and making a fire, with a tiny column of smoke going up in the air. With this simple gesture of turning one floor a little past another, you can achieve this form”. Santiago Calatrava once said in an interview with Chicago Sun-Times in 2005.

The Concept of the Chicago Spire Tower:

The concept of the spiraling tower was conceived from the smoke, emerging from the native Indian campfires along the edge of Lake Michigan. The swirling façade was artistically schemed to pay homage to the ancient Americans as well as to deflect the infamous gusts of Chicago wind. The 610 meters high spire was deemed to be the tallest building in North America by the year 2012, consisting of 150 floors. Primary design initiated a semi-commercial complex accommodating 250 hotel condominiums, 1200 luxury apartments and a sky observation deck consolidating the broadcast antenna at the top. The endmost design eliminated the commercial aspects and converted it into a residential obelisk of 1194 units. 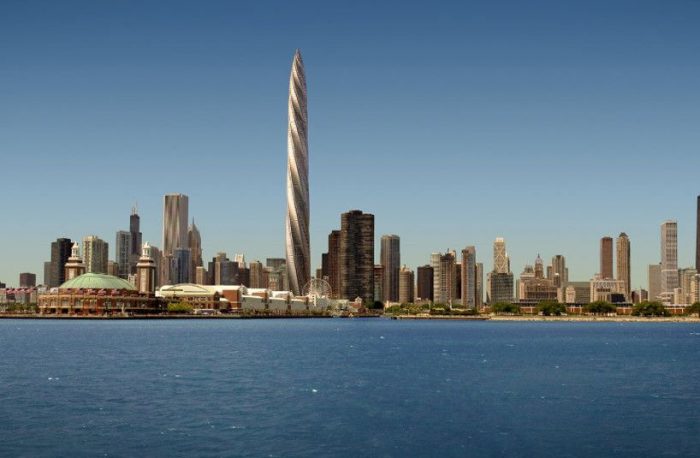 “Nobody is saying it has to be the highest building in the country. The idea was to build a very slender, elegant building in this skyline“, the architect commented on his project in the New York Times.

READ MORE:
10 Tallest Buildings in the world completed in 2018

The site was previously zoned for a tower composed of 35 floors and another of 55. Later, single sleek tower eliminated a couple of wider towers to minimize the impact of the built form on the migratory birds. The roof height was altered from 444 meters to 472 meters up to the top of the water tank. The foundation incorporates 70,000 tons of steel as well as 200,000 cubic yards of concrete while seven underground floors rest right over it. 34 footing caissons drilled 110 feet into bedrock, 20 to support the structural core and 14 got arranged in a ring around the perimeter.  Each floor was designed to be anchored to a central column while offsetting from the lower one in order to form a twiddle. Structural transition floors were designed after every 30-40 stories as it transfers stress to the center and maintains rigidity. Two emergency stairwells lead towards the ground floor in order to defend attacks similar to 9/11.

The entrance was approached from the lower Lakeshore drive to reduce the impact on traffic. A separate six-storied parking garage holding a capacity of 1500 vehicles was estimated to place, at the north, to reduce street level traffic congestion. The disused chunk of lakefront land was blueprinted as the most anticipated DuSable public park, a nine million dollars project curbed by financial limitations of Chicago authority. The park and the public plaza, containing the signature of Calatrava pedestrian bridges, were expected to be designed as a donation by the developer group. The greenery led towards the 53 feet tall lofty atrium lobby of the building which connects the residential units through 14 passenger lifts.

The flats ranged from 534 to 10,293 square feet of area, priced between $800- $1000 per square feet. World’s highest duplex penthouse was planned to be incorporated at the top of the spire.

“Santiago Calatrava is redefining the form of the American skyscraper with his Chicago Spire”, Fast Company Magazine reported.

Fordham Group undertook the development strategies of the tower as ‘Fordham Spire’. The overwhelming budget kicked them off the track which was replaced by Shelbourne Development Group. Irish-born executive of the company Garrett Kelleher restarted the project as new Chicago Spire, not to mention, with lofty aspirations. An unusual program of starting from top to bottom construction of the parking garage speeded up the process. Within a short span of time Shelbourne started to drown in debts as the estimated building cost of 2.4 million appeared to be a much smaller fraction of the actual cost, which still remains unknown. The construction work suddenly stopped in 2008, leaving 76 feet deep grand hole. After dealing with a number of lawsuits transferring from court to court, the developers gave a last try to retrieve the project which finally got diminished later in 2015. 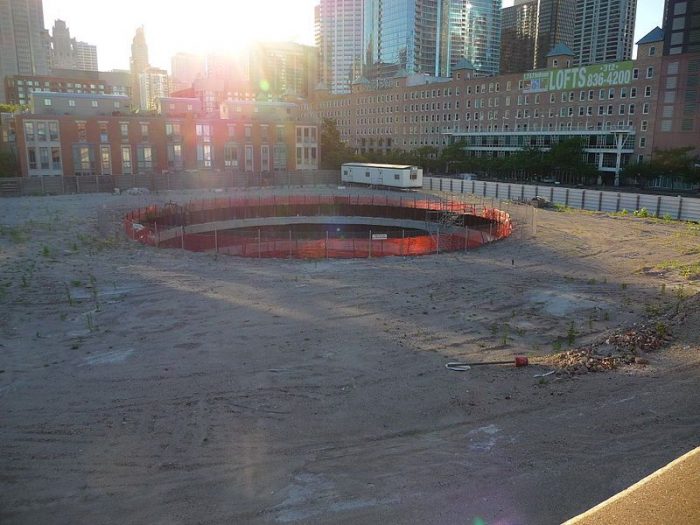 Construction on the site never advanced beyond the foundations. Photography by © Wikimedia Commons / Navy2004

A large group of critiques opposed the idea of Chicago Spire from the very beginning. Donald Trump, the infamous politician, and the current presidential candidate discarded the design with rather harsh disapproval. “I don’t think this is a real project. It’s a total charade”, he was interviewed for the New York Times in 2005. Many people compared it to a drill bit, twisted tree, Twizzlers or in the worst case, a Zucchini. Antony Wood, the Council on Tall Buildings and Urban Habitats, encouraged the project by stating, “these are buildings that are built for far more than economic return. They’re built to put a city on the map”. Nevertheless, Calatrava prefers to establish a more modernized building on the issue of revitalizing the decade-old design.

Currently, the Chicago Spire adorns the hall of fame for the unaccomplished ambitions of the windy city Chicago along with Eliel Saarinen, Adolf Loos, Walter Gropius and others.

All images courtesy of Santiago Calatrava