We have all seen movies like I, Robot which has debated the use of robots to serve humanity. A robotic arm, as well, can serve humanity in several other fields, like design and architecture. 50 years ago, no one could have imagined that people in the future would be able to use a robotic arm in building and construction. However, this is now possible thanks to the new digital era and all the technologies it brought along with it.

As architecture awaits large-scale use of robots in construction, we bring you some examples of buildings and pavilions that actually utilized robotic arms for construction: 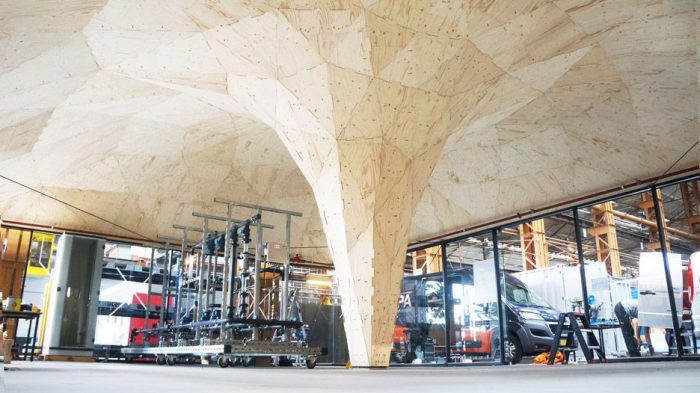 The designers from Studio RAP regard the small building as the “first robotically-fabricated building in the Netherlands”.

The studio constructed the structure, via a robotic arm, and named it SkilledIn Office. The pavilion is located within Rotterdam’s Innovation Dock—an education and technology center used by Alberta College and Rotterdam University, and it offers training and office space for technology students and entrepreneurs.

“We see a lot of potential in embracing digital fabrication,” stated Wessel van Beerendonk, a co-founder of the studio.”We strive for a direct link between the unlimited possibilities of the digital world and the material world through robotic fabrication.”.

“Our aim is to take this out of the academic world and apply it to building practice,” he added. “Still, there’s an enormous chasm between the digital design and the production of the building, and we’re determined to bridge this gap.“

The studio team made the pavilion out of 225 wood pieces using ‘Rhino’ software and a robotic arm. Then, they gathered the panels and constructed them to compose the main pillar as well as the 8-m-wide roof. 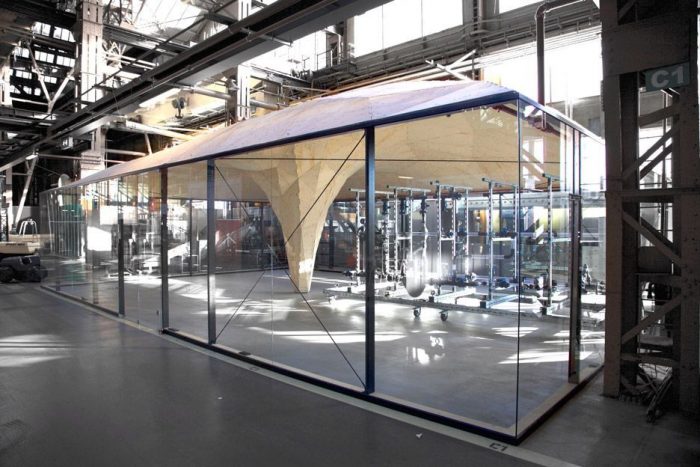 “We redefine the definition of the contemporary architect,” added Van Beerendonk. “Through digital fabrication, the architect can become a master builder, with increased control over the quality and integrity of the building in relation to the design intent.” 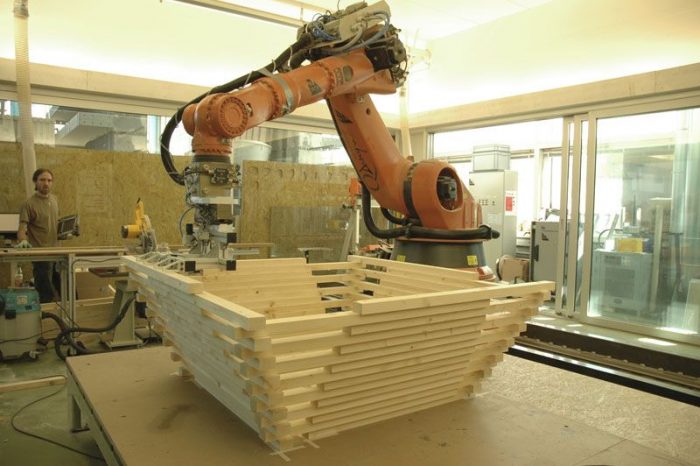 The university’s master-degree students worked closely with their professors to build this wooden pavilion after coming up with new robotic techniques. The team described the structure as the first 2-floor building in the world to utilize a robotic arm in construction. It took them nearly 5 weeks to build the pavilion.

“Through automatization techniques and innovative feedback processes, the fabrication system was able to minimize material waste. That was done through reacting to different material sizes even during the construction process,” stated Philipp Eversmann, the professor at ETH Zurich.

The group used hard slats of spruce of different sizes to make the outer shell of the pavilion. The material was not easy, though, for the robot to work with.

“The goal was to develop adaptive robotic processes which were able to handle unknown material dimensions and surface quality. This can limit material waste resulting from using synthetic timber products,” said Philipp Eversmann. “We used scanning devices and real-time feedback control during the fabrication process for this purpose.”

The team designed the pavilion’s bottom floor to host galleries and fairs, whereas the top floor serves as an observatory. 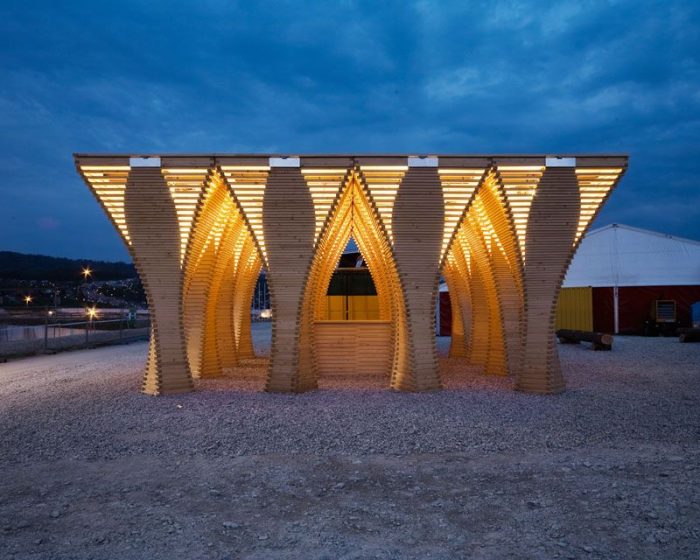 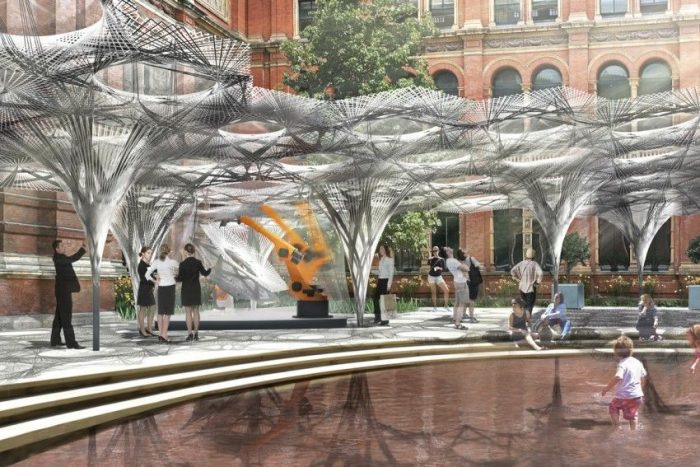 The pavilion’s designer team belong to the University of Stuttgart’s Institute of Computational Design and the Institute of Structural Design.

The group has constructed the pavilion at the V&A Museum garden in London, which also hosts important design activities throughout the year. 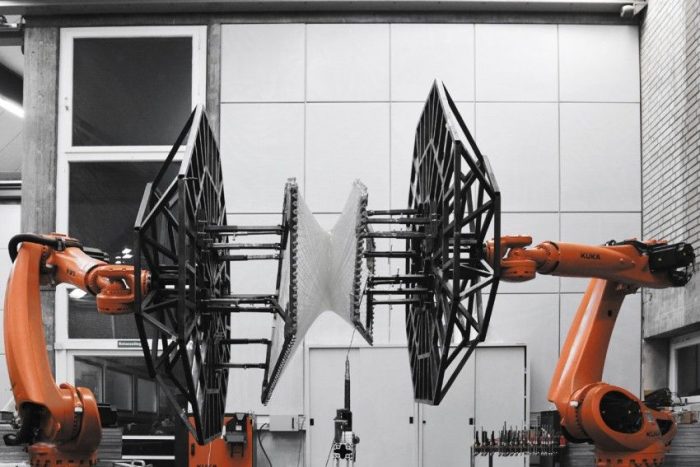 The 200-sqm-project encompasses forty beehive-like units which a robot has fabricated from carbon and glass fibers. Each of the units has a weight of 45 kg and lies on top of a conical stem. 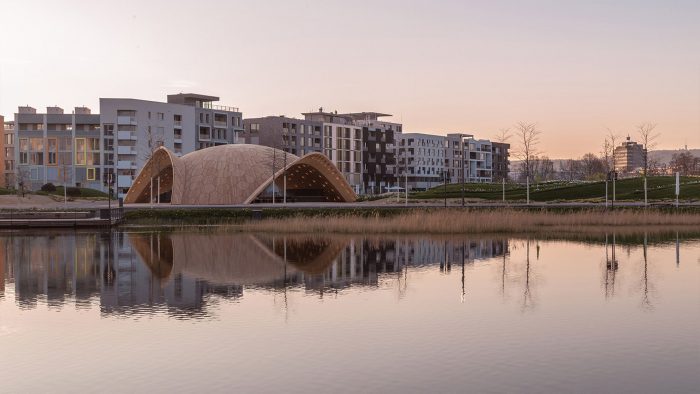 A research team from the University of Stuttgart used robotic arms to fabricate and ‘sew’ plywood laminate plates to create this pavilion. The team intended for the sea urchin-resembling structure to demonstrate the capabilities of robotics in construction and design. 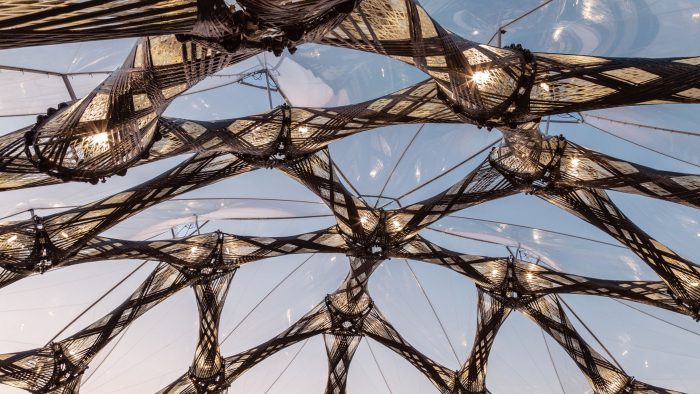 “The pavilion is the first of its kind to employ industrial sewing of wood elements on an architectural scale,” the researchers stated.

The team placed the sea-inspired pavilion over a student-gathering area at the University’s garden. Made of 151 plywood pieces of different sizes, the structure has a total weight of 780 kg and a height of 9 m.