Home » In Depth » “Robotization” of BIM : How Robots Could Improve BIM Workflow
In DepthProducts

“Robotization” of BIM : How Robots Could Improve BIM Workflow

It is remarkable that technology has a significant effect on our lives, and it influences all disciplines and majors including architecture. Information technology has facilitated the work of architects and provided them with softwares and applications that saved a lot of their time and effort. Even though there is extreme influence of technology on architecture, it has the lowest productivity among other fields[1]; it was approved by the U.S. Department of Commerce and the Bureau of Labor Statistics that architecture recently has the less production than it had in the 60’s[2]. This decay backs to several reasons: 1. the wasted time in documentation and paperwork, which increased with the design’s complexity.1 2. The dependency on human hand force in the construction process.1 Moreover, 3. The poor communication between design teams and contractors. 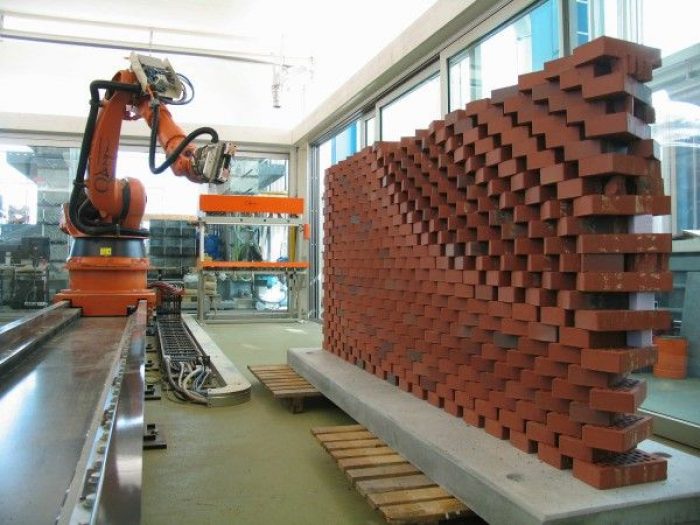 Other industries build upon machinery also rely widely on Robots, and automotive industry is setting a good example. The main cause of this is that such industries produce mass products, and their manufacturing process depends on repetition.1 On the contrary, architectural design hangs on the uniqueness in identity and components. Even so, the concept of involving robots to construction process is becoming the prime consideration and concern of AEC firms, specially the firms that adopted BIM technology to their system. They believe that robots can advance their productivity and accelerate the design workflow. In this article, we will argue the consequences of using robots in the construction, and its effects on the BIM workflow. 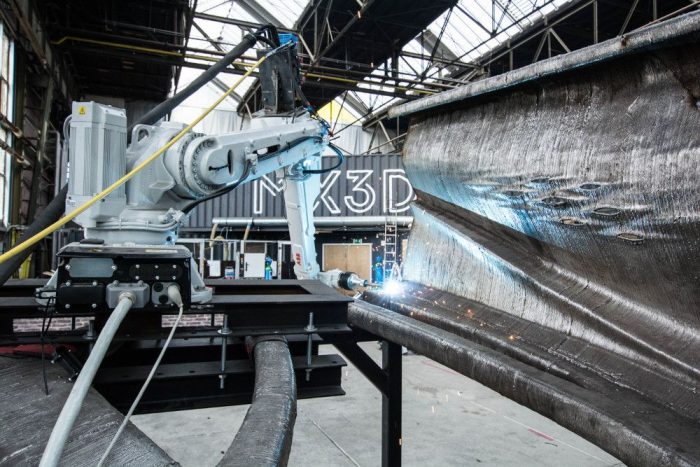 How Robots can improve BIM WORKFLOW?
How can robotization accelerate the design process that based on BIM technology? As we know, BIM has notable benefits on the design process; it simplified the tasks of architects and engineers, their performance becoming perfectly on tune; it speeded up data exchange process and smoothed the collaboration between different disciplines, it saved time and efforts, it reduced the documents and official papers and it improved the review and modification cycle. All this is excellent and perfect! Nevertheless, the stumble occurs in the construction process with the imperfect communication with the contractors. The accuracy of BIM model will not be precisely built. Why? Because of the reliance on hand-operations. No matter how skillful the craftsmen are, the errors will be available. These technical mistakes, regardless of the structure’s simplicity, will have an impact on the workflow.2 For example, if the column was planted few centimeters off position, the coordinates of beams and other structural elements should be revised and repositioned. In that case, the contractor sends a technical report to the project manager describing the errors, who in turn will ask for immediate meeting with the design teams for urgent solution.2 The team decides whether recasting the column or modifying the whole design in line with the error. Both solutions are a total waste of time, which leads to delays in the project time schedule and to extra costs and charges.

Thus, the dilemma lies in the lack of integration between BIM and contractors. The prefabricated structural elements can be installed wrongly if the old construction’s methods were used. Therefore, technology should be involved effectively to transfer the technical data of the models accurately. How? By employing the Robots. As mentioned before, robots are utilized in most industries, which increased its productivity and efficiency. Why don’t robots be operated for architecture? It will definitely have great benefits on the construction process; first, robots reduce errors and the rework. They double the precision of installation, and build the model meticulously and implement it literally. Secondly, they save the time and achieve an efficient timetable. Thirdly, they manage the construction process and slash the amount of waste materials.1 Finally, robots will be able to produce complex geometries and shapes that might have been impossible to construct before.[3]
Examples of using ROBOTS with BIM Technology
Recently, BIM Companies and known construction firms are carrying out projects and researches that apply robotization for BIM in the construction process. The projects are real, well implemented, and promising.
1. Tekla Structures/LM80 Handheld Software Integration
Tekla Structure BIM had collaborated with Trimble Robotic Total Solution in developing a software that eases the interoperability between the two technologies. Trimble LM80 software is able to transfer the data accurately from Tekla Structure Layout Manager to Trimble Robotic Stations. It simply set up the coordinates of structural elements on the site. Swinerton Builder is the first firm that employed this software in their Waikiki Plaza Expansion project in Honolulu. ” With  this connection,  we  are  able  to  deliver  precise  well  coordinated  information  to the  field. Prior  to  the  integration  between  Tekla  Structures  and  the  Trimble LM80  software,  much  of  our  time  was  spent  in  the  office  developing adequate  dimension  schemes  with  back  checks. 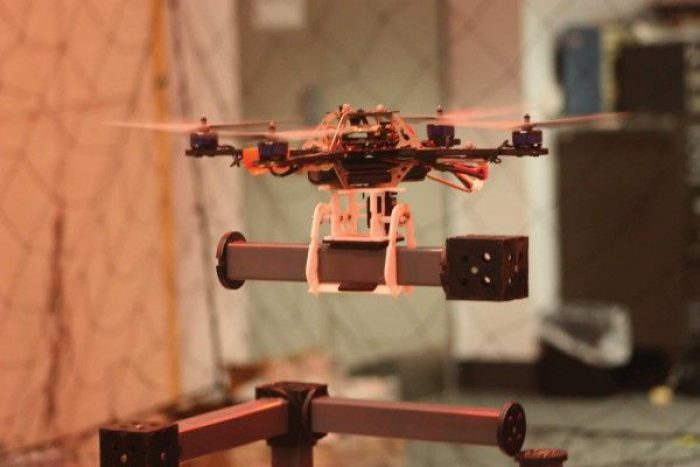 “The Project Manager Doug Paasch at Swinerton described the company’s experience with the software. The company also used this technology in a college campus renovation project located 60 miles from Sacramento. The Superintended and Detailer Jeremey Melton illustrated the process: ” Better  yet,  once  the foundation  or  other  site  work  is  complete,  we  can  quickly  resurvey  the  site  to gather  the  actual  bolt  locations  and  other  data  from  the  field  and  transfer  it back  to  the  original  3D  model  to  create  as-built  drawings,  map  out  the  floor wall  locations,  and  other  items  and  create  drawings.”[4]
2. Scanner MOBILE Robots for BIM
The concept of Mobile Robots was implemented first in the 40’s, and today they are commonly used in commercial and industrial fields. They are movable machines; some can talk, walk, clean, and take pictures etc. For architecture, they were never used for design or construction before, in spite of their numerous benefits and advantages. Nowadays, mobile robots are developed to serve architectural purposes especially with BIM technology. They are equipped with Wi-Fi connection, Local Positioning System (LPS), and digital cameras. The LPS technology make it possible for robots to scan the building horizontally with up to 1,000 sq per minute, and vertically to reach 4 feet height. This information can be useful for the design process, and it can be sent wirelessly to the design team with coordinates, temperature, radiation, and even air quality. The technology is also profitable for future maintenance scheme, which can take photos and videos that viewing the latest condition of the building.[5]
3. Skanska integrates Robots with BIM
The Swedish construction firm Skanska has adopted BIM technology a long time ago and employed it effectively in all its projects. In addition, it involved the robot technology to its construction process with interoperability with BIM softwares. In their Norway office, they used drilling robots that derives its accuracy from BIM model. “On  a  recent  test  during  construction  of  Skanska  Norway’s  new  head  office,  a  drilling  robot  mounted  on  a  mobile  elevated  work  platform  performed  two and a half  times  faster  than  a comparable  two person  crew  doing  the  same  work  via  traditional  means,” BIM Manager, Rubert Hanna explained. In Sweden, the firm applied robots for bending and welding the rebars that are used for pile fabrication. The district manager of Skanska Sweden described: “We  purchased  our  first  robot  for  this  application  in  the  1990s,  and  this  year  the  robots  will  enable  this  facility  to  produce  175,000  meters  of  concrete  piles,”[6] In their U.S office, they participated in research that studied the possibility of using Robotic Total Station for measurement and obtaining global coordinates. Students from Texas A&M University and College Station prepared the research, and it has the same concept with the Trimble Software that was employed by Tekla Structure. The difference here is that they used Image Assisted Stations (IATS) that were provided with cameras.[7]
Robot Technology can be used for BIM
1. Quadcopters
Gramazio Kohler Research had several studies about using quadcopters for construction process. They have an experiment of using those flying machines successfully in assembling a 6 meter height model of twisting tower with 1500 foam bricks. The quadcopters picks the brick, and receives the exact coordinates from a motion capture system that is mounted in the ceiling of the room.[8] The installation speed ranges about 100 bricks per hour, and can be used to implant Space frame structure’s elements which can be placed easily even for high altitude. Moreover, the quadcopters can be employed for tensile structures in terms of carrying and tightening the cables.[9] The quadcopters will be a construction revolution for its significant outcomes.
2. Robots for Concrete, Steel, and Polymer 3D Printing
The Chinese company Winsun has been able to build full houses with concrete and other recycled materials using a huge 3D printer. The company clarified that the project was successful in saving 60% of construction materials, 70% of the estimated time, and 80% of the labor. [10]
Joris Laarman had designed, in collaboration with MX3D a steel printer that is used to print an entire bridge at the MX3D for Oudezijds Achterburgwal canal. The printing process started in 2015 and it is expected to be done in 2017!10 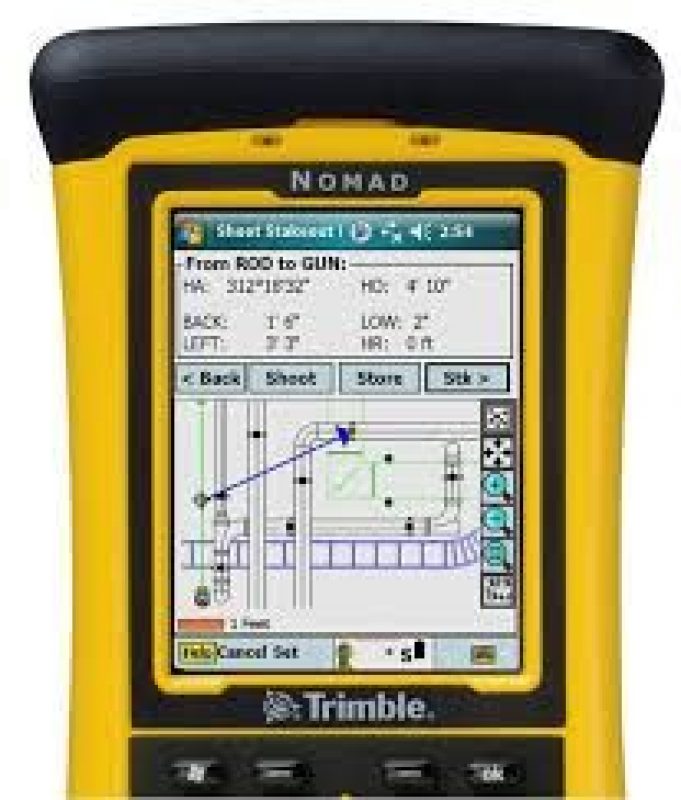 Polymer Printers were first established in 2007 by the Professorship for Architecture and Digital Fabrication at ETH Zurich. At the beginning, off-shelve polyurethane (PU) foam were used as printing material. It was printed layer by layer and hardened by heat with 30 cm per minute speed. This polymer printer is convenient and can be occupied to produce the doubly curved meshes and to construct extreme cantilevers as a porous material.1
Written by Arch2O Internship Team
[1] Hack, Norman, Willi Lauer, Silke Langenberg, Fabio Gramazio, Matthias Kohler. “Overcoming Repetition: Robotic fabrication processes at a large scale.” International journal of architectural computing 3, 11 (2013): 285-99 http://gramaziokohler.arch.ethz.ch/web/publikationen/e/papers/0/0/0.html

[10] Zimmermann, Eva. “What The Future Holds For 3-D Printing In Architecture And Design”. Houzz. January, 2016. http://www.houzz.com/ideabooks/57915631/list/what-the-future-holds-for-3-d-printing-in-architecture-and-design