Architect Marianne Mueller, the AA Visiting School Director and former AA Unit Master Marianne Mueller of Casper Mueller Kneer Architects, in collaboration with artist Fran Cottell, has created an installation project that reflects on the Rootstein Hopkins Parade Ground as the dream site for Jeremy Bentham’s experimental panopticon, the real Millbank Penitentiary, a military parade ground and now university campus, outdoor gallery and thoroughfare to Tate Britain. The intervention re-enacts a scaled version of the prison’s infamous plan, editing and reinterpreting it into a more socially active figure: a flower-shaped bench. Each of the six pentagons or petals – originally shaped to facilitate social control and designated for solitary confinement – now invites informal gathering. The intervention plays with ideas of exclusion and segregation while offering a generous place within the larger barren square. Generating and disrupting the social activity framed by the square this project builds on a series of previous intervention projects by Fran Cottell and Marianne Mueller into domestic and institutional spaces; the focus shifting from a relationship between visitors and inhabitants to between moving and static participation, occupations and activities to more unpredictable conditions and outcomes. 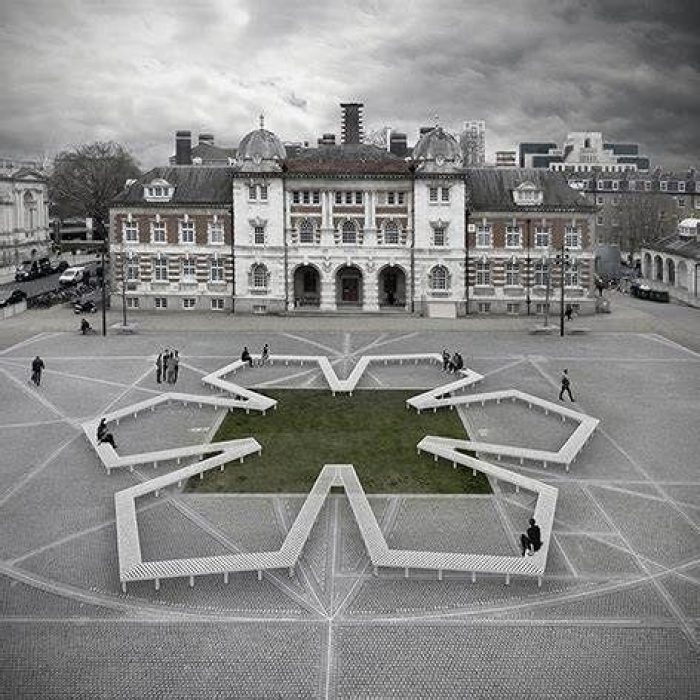