The concept emerged from a technical problem inherent in the site. Cleaning the polluted soil on the site was seen as a necessity, but would cost one quarter of the overall project budget to complete. Through futher investigations, we discovered that since the soil was contaminated with only heavy metals, it allowed for stable ground on which to build. We then proposed to cover the entire site with a wooden deck, thereby creating a “safe” surface. Thus, a more architectural and sustainable solution to the site’s problem was achieved rather than the excavation of the entire site.

This concept also allowed for an advantageous solution to the multi-client program. Two clients share the facilities: a sailing club and a youth house. Their desires were opposite: the youth house wanted outdoor space for children to play, while the sailing club needed space to park their boats. The project is the architectural result of our negotiations between these two contradictory demands: it allows for boat storage underneath and playground above. Through a series of rolling, wave-like ramps, the interior program is spread across the site creating layers of space. An observation deck becomes an interior court. The roof of the interior spaces doubles as walkable, playable, usable space on the exterior.

The presence of cool, hard surfaces on the interior of the facility is meant as a contrast to the wooden exterior, helping to further reinforce the dominant attitude of outdoor activity promoted by the youth house and sailing club. Overall the project attempts to achieve a harmonious presence with the surrounding context. The use of the deck to preserve the soil also reduced the overall use of materials on the project, thereby lessening it’s potential carbon footprint.t. The form of the project invokes the motion of the adjacent waterfront and the motion of play. Distinctive yet familiar, the Maritime Youth House remains a successful and playful gesture to it’s site, clients and users. 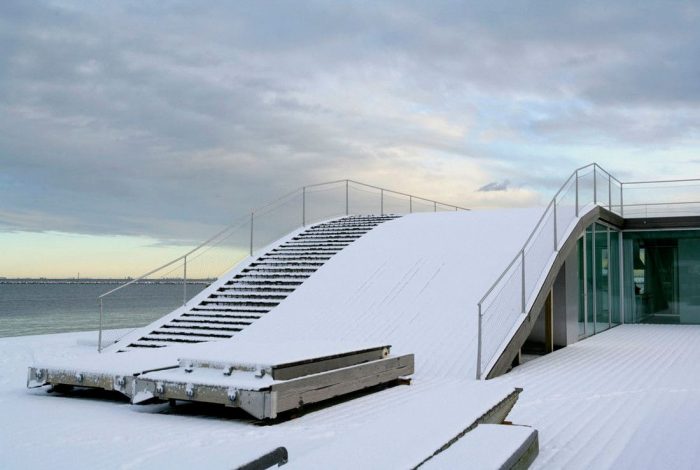