Is this yet another addition to China’s meteoric development of luxury residential high-rise buildings? Well, in one hand yes, but there is a more distinctive side to it. What the California-based firm, 5+ Design has accomplished is to bring the green space from the ground floor up to the skies. Each dwelling has its own green unit while enjoying the views of the reborn lake. It is also a different take on the skyscraper where sharp straight lines are something usual for the eye to follow.

Each residential unit is seen as a block, similar to Le Corbusier’s concept of the Unite d’Habitacion. What remains the same is this social class difference, which clearly has an impact in the city of Chengdu with all the luxury high-rises. Affordable accommodation seems to not exist in the mind of the people in charge where project by project they shape the city’s (the same goes for many cities in China) population by giving option to the well-off and not to the rest of the society. Clearly driven by greed and money. 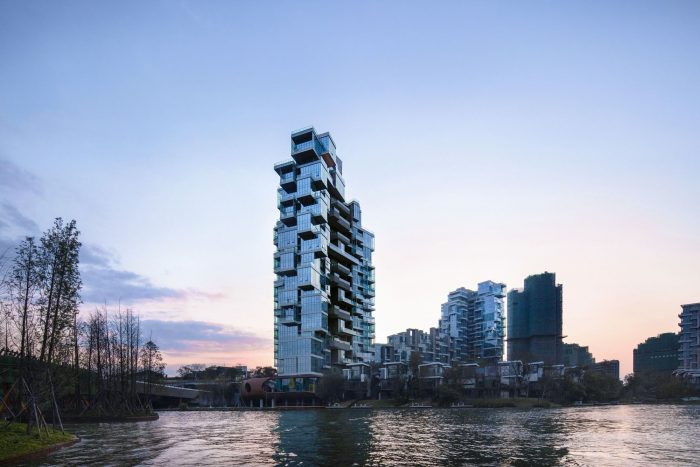 Oh, the wonders of late capitalist society. As if it were a designer watch or sports car, these apartments provide the individual not only with their primary functionality (in this case, shelter and living – machine à habiter ), but with the added commodity value of being a unique piece of architecture on a privileged condo – a spectacular, fetishized piece of space. Truly, these are not homes for the everyday life of common folk. They are either for wealthy families to live on or for the beautiful, near-pornographic-render-consuming internet crowd (of which we are, proudly or not, undeniable members – you are, after all, reading this article). 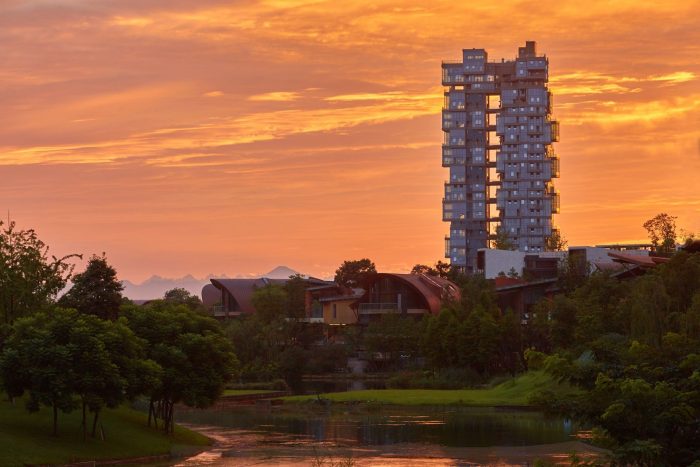 Actually, on this note, one could go as far as saying this building ‘Spectacular’ in three different ways. Firstly, it’s ‘spectacular’ because it’s visual bravado, it’s (somewhat successful, I would say) attempt at a particular type of elegance and good taste, and it’s sheer power as an image, representing wealth and late-capitalist economic success. One can’t help but to look at these images and say they are beautiful in about the same way that a Coke and a cheeseburger are tasty: it’s a specifically capitalist type of beauty – excessively wasteful, but beautiful, nonetheless.

Secondly, it’s ‘spectacular’ in the Situationist sense, as Guy Debord has stated in his book “The Society of the Spectacle”. Which is to say, the project, as an image, is a fetishized commodity, a vapid member of the economy of flows that, in late capitalism, deprives everything of all meaning except monetary meaning. Much of the value of these buildings has to do with their existence as an image. As a part of the ‘Spectacle’, the Krystal Laputa condos are a paradigmatic example of how architectural design and communication is undeniably and irretrievably bound to the logic of the market. 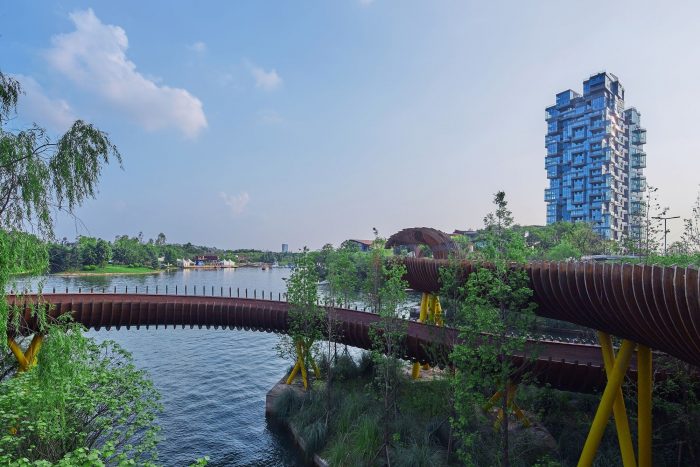 The third way in which this project is ‘spectacle’ is connected to another meaning of the word: spectacle also means glasses, and the whole perimeter of the building, throughout all of the apartments is made of glass – giving each cell a dominating, panoramic view of the city and of the artificial ‘nature’ that has been provided for in the nearby areas. Which is to say, the towers are as if they were glasses, but of a very specific type. Money tinted glasses, that make the world (or your life) look whatever you want it to look. The view from inside the apartments must be how rich people see the world – or how everyone would like to see the world, from a higher up position in the economic pyramid. In fact, maybe it’s how we all see the world – from a position of image and stimuli consumption, like we are doing right now. In one word, spectacles. 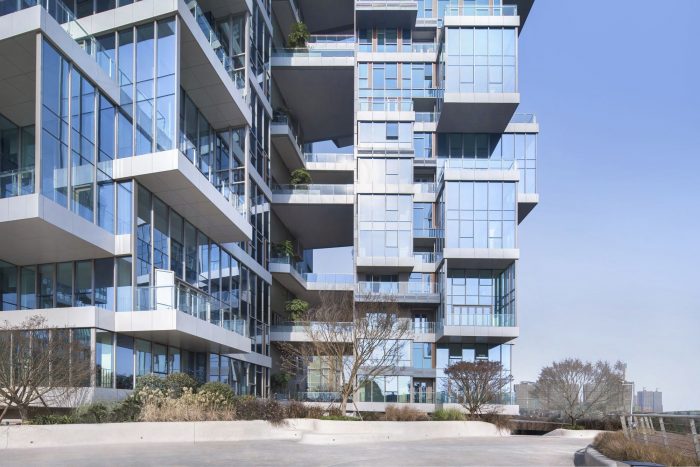 These three luxury high-rise towers located in Chengdu, China are under construction and nearing completion. The apartments are meant to be part of a ‘floating neighbourhood in the sky’ and a ‘lake-side community’ with individual skylines and views of the city. Private gardens are provided for each apartment on every level, along with a tea garden on the ground floor, which overlooks the lake.

‘Krystal Laputa’ looks like any residential tower block you could find in Sandton, in downtown Johannesburg. The building is lakeside only in the semi-convincing renderings and only achieves its community through its pre-calculated future density. The towers are manicured to a t and from their aesthetic you can already tell what kind of people would stay there, which would most likely be the international business-class folk who work in the far city. 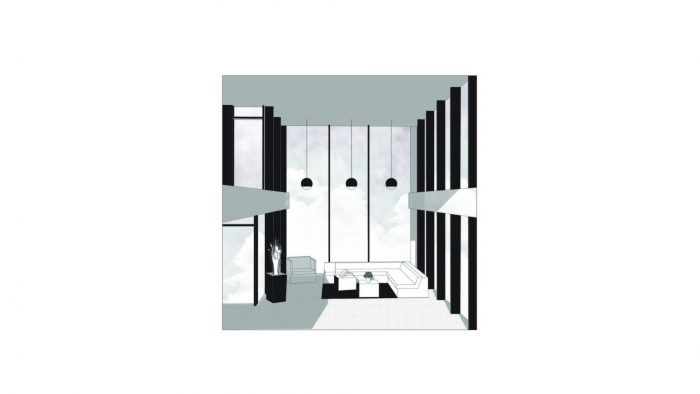 Monumental Installation over the Arkansas River | Christo and Jeanne-Claude