As part of ongoing research on Bending-Active structures conducted at the Institute of Building Structures and Structural Design (ITKE) of the University of Stuttgart, the Bend9 pavilion further explores the potential of engineering systems that use bending as a shape-forming strategy. Developed by ITKE engineer and researcher Riccardo La Magna during the residency period at Autodesk’s Pier 9, the pavilion focuses on intelligent material usage for the construction of complex freeform surfaces. The project specifically engages with the challenges of building load-bearing shell structures, arbitrary in shape and geometry, by simply exploiting the properties of bending. Bend9 presents an alternative construction approach that departs from traditional building systems. Instead of using preformed elements, the pavilion takes advantage of the deformation qualities of planar sheets of material to achieve its global shape. The construction logic is directly informed by the mechanical features of the plywood employed for the project. The overall geometry is therefore the result of an accurate negotiation between the mechanical limits of the material and its deformation capabilities. To fully exploit the large deformations that plywood allows for, the thickness of the sheets had to be reduced to the minimum, leading to the radical choice of employing 3.5mm birch plywood. The global shape of the shell provides additional stiffness, as the pronounced double-curvature helps to avoid undesirable deformation modes of the pavilion. Although a very elegant way to build large structures with minimal use of material, the high production costs and fabrication complexity of double-curved components often render their application in engineering prohibitive. The assembly strategy devised for the pavilion totally eliminates these issues and drastically reduces the fabrication complexity by resorting to exclusively planar components that make up the entire double-curved surface. 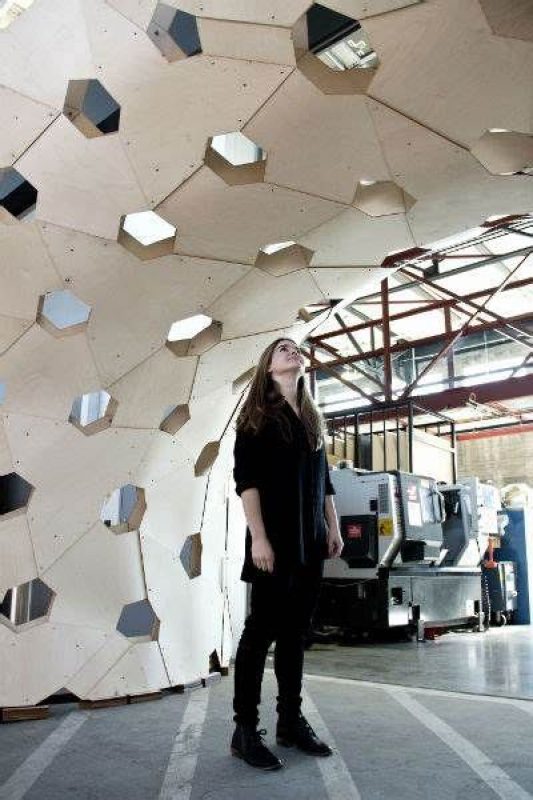 The pavilion is no longer the result of an assembly procedure of preformed pieces, but rather the outcome of a form-finding process guided by the underlying construction logic. The tiling logic of the initial master geometry guarantees that each component can be bent into the specific shape required to construct the whole surface. This is achieved by strategically placing the voids into target positions of the master geometry, ensuring that the bending process can take place without prejudice for the individual components. Although initially flat, each element undergoes multi-directional bending and gets locked into position once the neighbors are added to the system and joined together. The supple 3.5mm plywood elements achieve consistent stiffness once assembled together, as the pavilion, although a discrete version of the initial shape, still retains substantial shell stiffness. Despite the considerable strength achieved through shape, the extremely thin sheets of plywood had to be reinforced through additional means to increase the global load-bearing capacity. A second layer was therefore added to the pavilion to provide further load resistance. To couple the layers, the two plywood skins were connected using 5cm x 5cm square wood profiles. As the distance between the two layers varies to reflect the bending moment calculated from the preliminary analysis of the structure, the offset of the surface changes along the span of the pavilion. The offset reflects the stress state in the individual layers, and the distance between them increases in the critical areas to increment the global resistance of the system. The pavilion employs 196 elements unique in shape and geometry and 76 connectors for a total of 156 exclusive compound miters. The geometry of the elements is the result of the evaluation of the material properties and forming capabilities at the very early stage of design. Despite a large number of individual custom components, the whole fabrication process was easily optimized as each element is cut flat and later assembled on-site. The production was entirely carried out at Pier 9 taking advantage of the available facilities and built at Pier 9’s premises in San Francisco. The pavilion spans 5.2 m and presents a peculiar geometry that seamlessly transitions from an area of positive curvature (sphere-like) to one of negative curvature (saddle-like). The whole structure weighs only 160 kg, a characteristic that also highlights the efficiency of the system and its potential for lightweight construction. The smooth curvature transition and the overall complexity of the shape clearly emphasize the potential of the construction logic to be applied to any kind of double-curved. freeform surface. The very nature of the project required a tight integration of design, simulation, and assessment of the fabrication and assembly constraints. Overall, the Bend9 pavilion exemplifies the capacity of Bending-Active surface structures to be employed as a shape-generating process. For on-going research, the building serves as a first prototype for the exploration of surface-like shell structures that derive their shape through elastic bending. 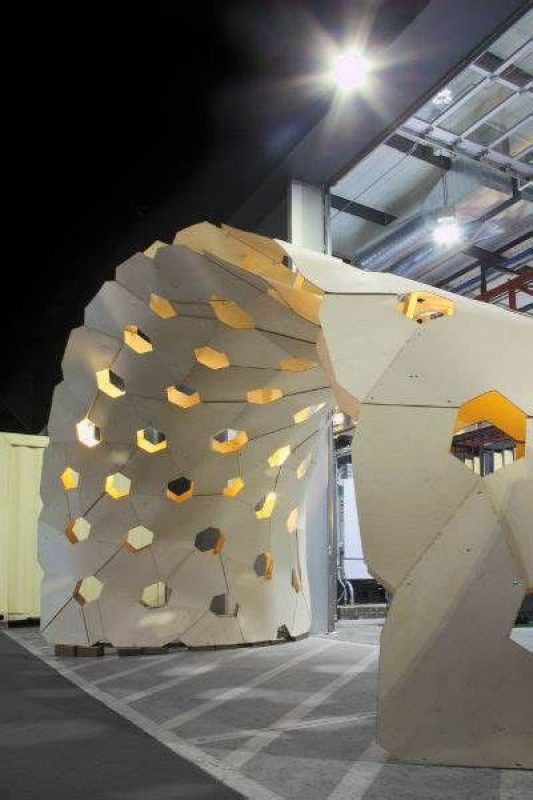