4 Interactive Art Installations Animate the Dull Alleys of the City

Spending some fun time in an alley doesn’t sound like a plan. Alleys are mere passage ways, with no potential for activity or anything of the sort, or so you think. Artists are here to prove that alleyways too can be made into something dynamic and upbeat. They can be fun. Check out these creative art installations for some of the underappreciated alleys of the cities; installations that have magically transformed the ordinary colorless narrow strips into a wonderland.

Hundreds of colored foam tubes, or noodles as the designers say, protrude from wooden panels fixed to the walls of two buildings separated by a narrow alley in Quebec, Canada. The pink and orange colored noodles, made of foam used for floating pool toys, extend above head-height and deep enough for one to sink in and feel the summer atmosphere. They have lighting fixations on both sides for the alley to be accessible at night. The colored tubes were distributed on the panels by the use of parametric design software like Rhino and Grasshopper. “The contrast with the historical surroundings attracts people to discover this forgotten space in the city,” says the designer about their installation. “”The piece creates a total environment that throws passers-by into a completely different world.” 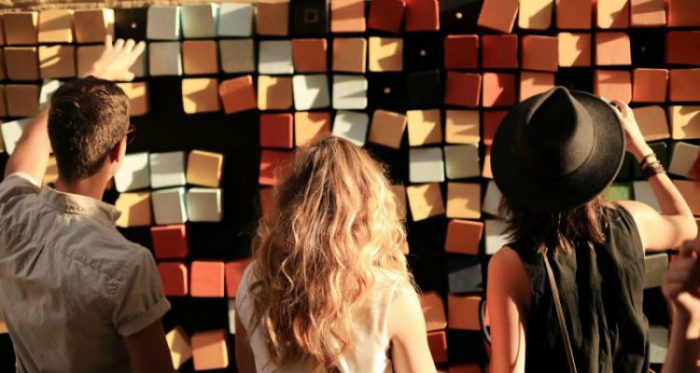 2. 20ft WIDE by Dan Cheetham and Michelle Tarsney, in Austin

20ft WIDE celebrates the Historic Urban Alley system in Austin, Texas, by turning the city’s downtown alleys into vibrant public spaces. The name 20ft WIDE comes from the 20ft standard width of Austin’s alleys. The art installations reviving these allies are a product of collaborative work. Architects Dan Cheetham and Michelle Tarsney, responsible for the site-specific installation, said they were “inspired by a child’s craft,” and explained, “Colored twine knits the architectural elements of the alley, creating a sculpture of floating planes that soar above and extend out of the alley.” These floating layers change the sense of the alley. They are integrated with hundreds of Origami cranes, hand-folded by the city’s children.

3.Neural Alley by Revenge of the Electric Woman, in Chattanooga

Neural Alley, another interesting interactive art installation in the US, is unfortunately just temporary, but it is quite a success. It was part of the Passageways project, initiated by the River City non-profit company to transform four alleys of Chattanooga city, in Tennessee, into inviting spaces. Neural alley is comprised of pixel-like painted wooden blocks. The blocks are movable and can be placed by the visitors, however they like, on two pegboards fixed on the walls of the two side buildings of the alley. The animation of the blocks is captured by cameras every 16 minutes, forming a delightful animated record which can be viewed on this website. The installation will remain open to the public until Summer 2017.

This whimsical art installation can be, both, seen and heard in a number of Sydney’s alleyways. It started as a temporary installation in one alley, but then it got so popular that it became permanent and got installed in a number of the city’s alleyways. The installation is made of 110 empty birdcages that play the songs of 50 birds, via attached speakers. These songs used to be heard in the city before the birds were forced to move away by the European settlers. The artist says, “The installation explores how Sydney’s fauna has evolved and adapted to co-exist with increased urbanization – inviting contemplation of the city’s past, its underlying landscape, and the sustainability issues associated with increased urban development.” The alleyway visitors’ descriptions of their experience standing at those alleys varied between wonderful, magical, and divine.

20 Photographs of Contemporary Architecture Prove That the Future Is Now