The project presents a development of the site of the old Shtastlivetsa Hotel. It is situated on the northern slope of Vitosha. In November 2007 the hotel was blown up and since then the terrain remains empty. The area is surrounded by tall pine forests and typical for the mountain ‘stone rivers’, which and impressive large aggregations of big stones. 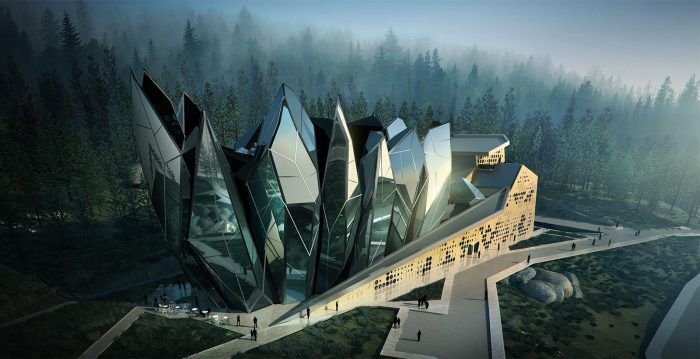 The conceptual design proposes a construction of a new hotel to replace the old one , keeping the powerful and contextual name ‘Shtastlivetsa’ in translation  ‘The Lucky One’, named after bulgarian writer and  passionate traveler Aleko Konstantinov.

Crystals are undeniably one of the most impressive structures in nature.  The concept of the project follows natural principles of crystal’s external formation, referring to crystallography science. One of crystals’ characteristics is the ability to surround by themselves with flat walls. The walls of the crystals are crossing in ribs (edges), the ribs – in peaks (horns). All they are called restrictive elements. Same substance under different crystallization conditions forms different shaped crystals. There are 47 basic shapes, each of which may independently fence a crystal.

Crystals may have different number, size and shape of walls. Depending on the conditions of growth of the crystalline solids, some walls can develop faster and better, others remain small. But however the crystal grows, its form is determined by their logical internal structure. The concept underlying the project follows the same natural principles. The design presents a functional internal structure which is fenced by crystal forms containing ribs, peaks and walls. The crystal forms are carved in a solid volume, reminiscent of the typical for Vitosha Mountain stone rivers. The two volumes are developed around a preserved part of the existing stone rivers which has become a center of the composition and also part of the interior of the building. They work together as one structural unit and build an attractive vision of mountain 5-star Shtastlivetsa Hotel.

The building is divided in two parts not only visually, but also functionally. Restaurant and hotel rooms with a view to the city or the pine forests of Vitosha Mountain are located in the crystal volume. There is an atrium going through the floors with the hotel rooms that brings natural light in the lobbies of each floor. In the solid volume are situated public areas of the hotel. Another atrium is designed above the area with the stone river in the lobby.  Visual connections between different functional spaces are created to ‘invite’ guests in curious and exciting way to visit them. The volumes are connected by underground, ground and first floor.

The hotel capacity is 88 people (39 rooms and apartments). 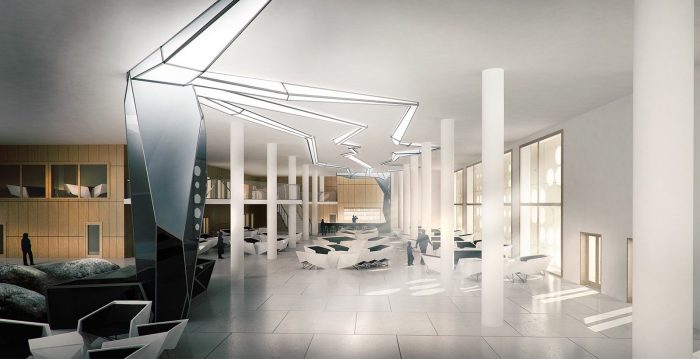 Arch2O has received this project from our readers in order to participate in the Students week 8 event, you may submit your own work for publication in the Students Week 9 , for more details please CLICK HERE