Dutch designer Olivier Van Herpt is not happy with the artistic functionality of the regular 3D printer.

“When I first started researching 3D printing the technology was exciting and interesting, but the desktop 3D printers were unable to produce objects at a human scale. Large and medium scale functional design objects that we use, like bowls, plates & decorative objects could not be made. The objects made with desktop 3D printers were also low in heat resistance and weren’t food safe. Industrial 3D printers could make food safe objects for everyday use but these would be too costly to produce.”

If you want something done right, you’ve got to do it yourself.

Olivier Van Herpt is a staunch believer in useful design accessible to all. For him, craft and art are two such beautiful fields that mustn’t be tampered with. As children, we would revel in the marvel of getting our hands dirty while shaping and creating little cups and pots with the potter’s wheel. But now Van Herpt uses technology to curve its way around and blithely create digital ceramics. It’s amazing how he took 2 years and designed his own 3D Printer, that could print using ordinary and hard garden clay, instead of the expensive clay filament that a regular printer required. This was his first step to innovation in an effort to reach the common man, without fleecing oneself. Van Herpt constructed a method of printing and production that instead of expelling layer by layer, surfaces, and combined filaments like the usual 3D printer, this design allows the gradual drip of clay, just as how stalagmites naturally form in caves, retaining the purity and ingrained strength of the material. Olivier and his printer soon began creating magic by producing slender and slim ceramic vases, pots, that one could actually hold and use in real life. He has become renowned for this line of art and design, pushing the boundaries of form and design with material as simple as clay. But how did the Dutch genius print sound now?
Olivier Van Herpt has now collaborated with Spatial Sound Designer Van Broekvhen in his latest project. 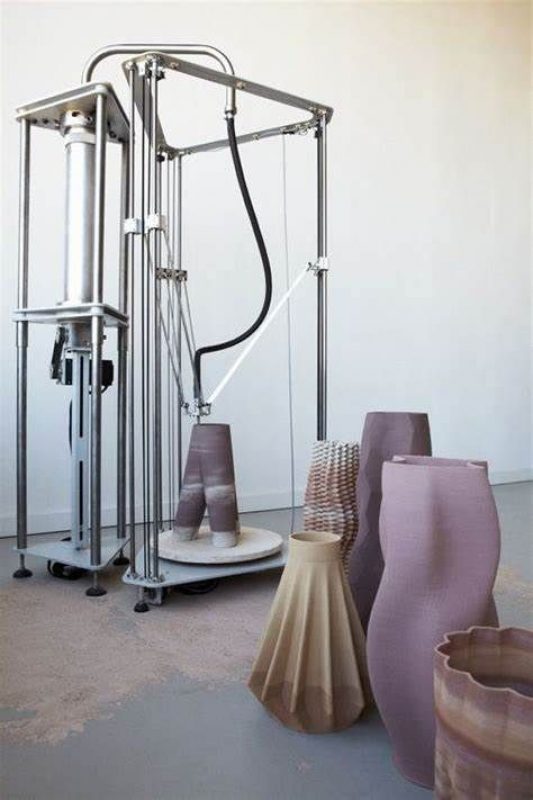 “SOLID VIBRATIONS”
The paradox in the title resonates loud and clear.
Van Broekvhen, an architect and musician, indulges in the flow of sound to create shape, movement, and imagery in his stunning visuals. Van Herpt used his keen eye and creative self to procure the help of Van Broekvhen for recreating ceramics with the effect of sound.

What happens next is incredible.

Van Broekvhen mounted a speaker directly below the printing platform. The huge speaker was then used to play basal tunes, low edgy hums, and vibrating sounds.  These waves which rose up through the porous print platform, caused the clay to be expelled out to resonate with the tones of the speaker. The intensity and distance of the sound waves are expected to affect the physical texture of a malleable material like clay.

The result was a series of pots with thin, fine grooves and rippling textures.

These were literally sound waves embedded and made permanent.
A visual depiction of sound.  An amalgamation of the two senses.
The graphic depictions take many forms and are exquisitely neat and uniform. It’s hard to believe these immaculate patterns are produced just by a printer vibrating due to sound. The project is experimentation turned right. Visit www.oliviervanherpt.com for more of these exquisite creations.
Watch how it unfolds here!!

‘Solid Vibrations’ is unique because a digital middleman is absent. The printer vibrates with the rhythm of the sound waves themselves, directly impressing them into the clay without the binary figures looming above. Olivier Van Herpt and Van Broekvhen have shown to us the new generation of design, where the user and artist are together in a field of possibilities blurred with digital fabrication.
Similarly, there is no reason why any speech or form of music cannot be etched to remain on our tables forever.

Which raises the question – If abstract tunes could be imprinted onto clay, then why not your favorite song?

You can now live like Van Gogh in 'The Bedroom'.