Being the tallest tower of Scandinavia, the Turning Torso stands sculpturally to compose a poetic landmark with the skyline of Malmö, Sweden. The Spanish genius Santiago Calatrava infused movement to structure and carved out the spontaneously engineered artifact of white marble. The 190 meters high edifice is the second highest residential building in Europe and was planned to be exhibited in European housing Expo 2001. The building is situated in the western harbor of Malmö beside the Ribersborg beach, incorporating a picturesque view of Copenhagen along with the connection bridge between Sweden and Denmark.

“The Twisting Torso is one of those superb examples that went beyond the creation of a signature tower and helped to shape an entirely new and invigorating urban fabric”, said Timothy Johnson, Vice Chairman, CTBUH Board of Trustees and Partner, NBBJ.

The concept developed much earlier within a sculpture of Calatrava. He abstracted the human movement into a stack of seven cubes twisting around a spinal core. The real scale of Turning Torso consists of nine cubes, each considered as an individual unit holding five consecutive floor slabs while dramatically spiraling in a whole right angle from toe to tip, encircling a structural nucleus.

The reinforced concrete core is supported by the foundation slab and accommodates stairs, lifts, and other services. The inner diameter of the core is 10.6 meters, concrete thickness starts from 2.5 meters at the bottom and gradually reduces to 0.4 meters from tapering. A steel trussed exoskeleton strengthens the nuclear core by clasping each unit with diagonal and horizontal struts. The spine is later fractionated into multiple smaller struts to embrace each floor of all units. The extrinsic skeletal system resists compression and transfers shear forces to the concrete core, at the top of each unit, resisting wind load and damping external vibrations.

The slabs, square at the core and conical at the edge, are made of cast in-situ reinforced concrete. Five slabs of each unit are supported by 11 steel columns. Conical portion suspends as a cantilever structure to transfer floor column load into the structural core with the support of pile foundation, while achieving a maximum thickness of 90 centimeters. The rotation of the floors results in uneven dimensions. The ground floor covers 370 square meters while the top most has an area of 430 square meters. The first and second units are left to accommodate offices within 4000 square meters. The rest of the units contain 147 residential apartments ranging from 45 to 190 square meters, located on 14th to 52nd floor forming a total area of 13,500 square meters. Each of the 53rd and 54th floors is interior decorated by White Architects which locate double-compartmented meeting rooms with a 360-degree view of the surrounding landscape.

2250 slightly tilted flat glass windows are engraved within the white marble facade with 2800 curved aluminum panel. Each unit consists of 300 panels. The whole building including the exterior skin is lit artificially by Golden Dragon LED from Osram and custom-made fixtures from Louis Poulsen.  Environment-friendly Osram LED illuminators are accompanied with motion sensors for interior lighting.

A black granite reflecting pool features an aristocratic entrance into the granite lobby. Five elevator shafts are destined to different floors. The residential units are privileged by a separate trio of lifts, heating and cooling systems. High specification limestone from Jamtland of Sweden wraps the guestroom floors up to window sills. Other rooms have oak wood finishing. 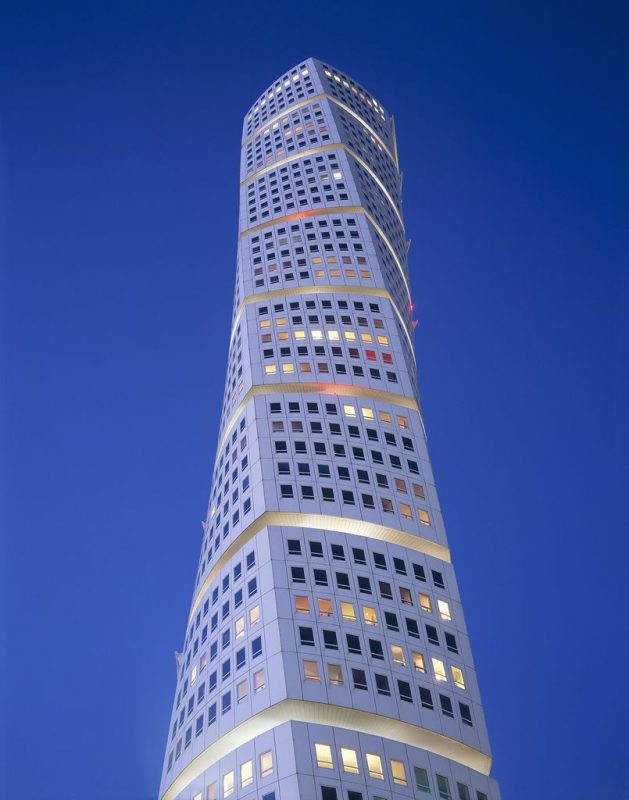 Tilted bathrooms contain granite surfaces and under-floor heating facilities. Kitchens are furnished by Gaggenau and Bosch including light stained oak counters and glossy white laminated cabinetries. Other facilities include a function suite at the 7th floor, a gymnasium with two saunas at the 43rd floor, accessible wine cellars, intranet supply and friendly features for the physically challenged population. The building has a separate structure for parking, including three basements. The additional building connects the tower to the first floor. The separate parking arrangements are accessible through a private tunnel.

The Turning Torso is a successful example of environmental engineering and performance-based vertical transportation. It encounters a great challenge of standing upright at a windy coastline and could effectively sustain a 44 meters per second wind by displacing only 30 centimeters. The building is designed upon latest sustainability measures. The heating system connects to the power utility of Sydkrafts system, accompanied by 100% locally renewable systems. Organic and kitchen wastes are transported through separate pipelines directed towards Malmo’s biogas plant. All the security systems incorporate separate power generators, including lifts, sprinklers, and emergency lights. The large windows and heightened ceilings permit abundant interplay of daylight and scenic pleasures.

The extreme engineering and aesthetic quality earned huge appreciation from critics and a number of awards, not to mention. The Turning Torso was awarded Ten-year Award from CTBUH. Vincent Tse, CTBUH Trustee and Managing Director at Parsons Brinckerhoff adds, “Iconic, astonishing, and inspirational, the unusual building has had a deep influence in our industry and has added a unique feature to Malmö’s skyline. Since this project was announced 15 years ago, architects worldwide have been inspired… It is without adoubt that Turning Torso has greatly influenced the way tall building design has developed over the past decade, especially with regard to 3-D geometric design”.