The Challenge
The size of the typical block in new Chinese cities starts from approximately 500×500 square meters. Such largeness, compared to the range of standard blocks in European cities, is a result of scaling city for cars over people as well as accelerating the development. The problem of the Mega Block is two-fold: 1. It is anti-urban – it does not produce a walkable city and at the same time diminishes the quality of urban spaces. 2. It is high-carbon – its dependence on cars pollutes the air while produces traffic congestions. Once a city is built based on such inhuman spatial scale, it would be very difficult to remodel it into a livable environment.

It is urgent then to reconsider the size of a block before more Mega Blocks are realized in the on-going urbanization. In other words, block size has to be reduced to make city both human and clean again. 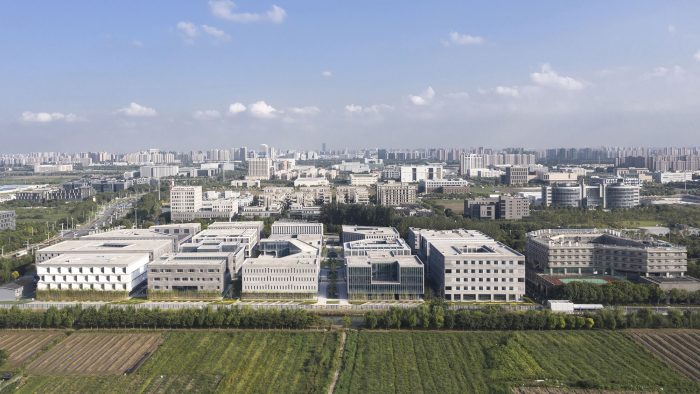 an elevation of an edge street. Image © Fangfang Tian

The Project
While our practice Atelier FCJZ have not yet had the opportunity to plan an entire town or city, we were given the task to design a R&D park outside of Shanghai in the satellite town of Jiading, the Industry 4.0 Demonstration Base, in 2008. The urban dimensions of this district for high-tech companies, total 24.67 hectares of land in question, prompted us to treat it as a project to experiment a smaller than usual block size.

A specific question: How small can a block be? We are aware that a block is part of the urban fabric and defined by streets; the size of a block is determined by density, scale, and program.

An office park is typically suburban and reached mainly in private cars by its occupants, who would then spend the day in their offices before driving home. There could be little urban and social life. To achieve urbanity in an office park may be too tall an order but perhaps we could try to at least invite people to come out and walk around during their lunch break? Before defining the block, we had to take on fabric and street. 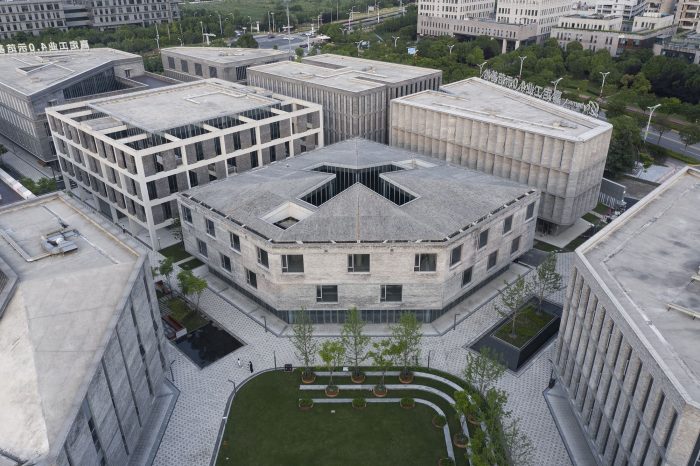 The Fabric
In the master plan, we tackled the issues of density and program and proposed a low-rise (4 stories) high density (average master plan FAR 1.2/ block FAR 2) carpet with mixed programs: Mainly offices for high-tech companies with public/ commercial facilities on the street level and some residential elements (rental apartments and hotels but not condominiums due to Chinese zoning regulation) on the top floor.

The Street
The primary urban space in this work-oriented area is the street, which is designed to be 10 meters wide to allow vehicular traffic and spatially defined by the 3-meter wide covered walkways on the ground level of the buildings on both sides. As the project is situated in the southern Yangtze River region, a cantilevered canopy or arcade would protect pedestrians from long rainy season and excessive sun in the summer. 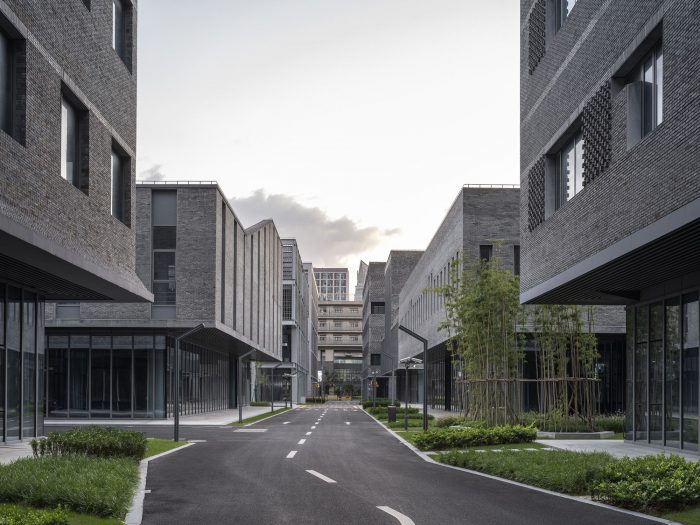 a bend on a vehicular street. Image © Fangfang Tian

The Block
After weighing the facts that each company may own a floor area up to 4,000 square meters, retail outlets and eateries would desire corner locations, walk-ability and connectivity between blocks, and more building-street interface in general, we set the block size at 41.2 x 41.2 meters, thus an antithesis of the typical 500-meter and up Mega Block, or a Mini Block.

For reference, we searched globally for a city with comparable block size and discovered downtown Portland, Oregon in the United States, a vibrant, livable city center with approximately 40×40-meter blocks.

Other important dimensions of the Mini Block:
Grid: Approximately 50 meters x 50 meters from street center to street center.
Block/Building module: 41.2 meters break down to five 8-meter column-to-column bays plus 0.6 meter on each end for potential architectural articulation of facade. 41.2 x 41.2 meter meets the floor area ratio of 4,000 square meters per block to allow a block to be occupied by a number of small firms or one large company. It is a single-building block. While the majority of block-buildings are of similar sizes, each one is designed differently in terms of floor plans and elevations, which allows the development to meet the varied space as well as identity needs of the businesses and enriches the experience in the urban spaces.
First 4 Mini Blocks: For the architectural design phase, we began with four Mini Blocks. We were asked to facilitate a number of public functions, such as a convention center and a hotel, the spatial demands of which resulted in a 8-story buildings. To be true to our master plan, we designed two separate pieces of architecture: One is four 4-story block-buildings on the ground;another a 4-story continuous loop building that “floats” on the top of the Mini Blocks. This might be an indication that the Mini Block may accommodate a higher density if needed. There are 22 block-buildings in an area of roughly 70,000 square meters designed by FCJZ. Others were designed by local architectural design institutes. 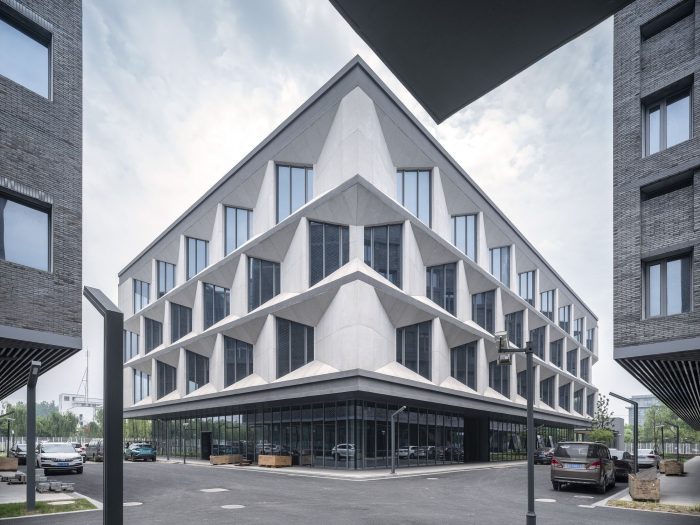 The Master Plan
The concept of master plan is reinforced by several other measures:
Architectural design guidelines
The conventional master plan for control in China does not define the specific locations and configurations of buildings and as a result it controls only the FAR, lot coverage, height limit, greenery coverage, etc. but not the quality of urban spaces. We developed design guidelines between the stages of master plan design and architectural design as a critical tool for implementation of planning or urban ideas. Beside our own office, other design institutes/offices participating in the project needed to follow closely the design guidelines.

Covered walkway system
Already mentioned above in street design, a 3-meter wide colonnade or cantilevered canopy is required on the street level for all the buildings, as specified in the architectural design guidelines.

Building envelope
Setback is generally not permitted from the second floor and up, also as specified in the design guidelines unless certain limited volumetric cut-outs called for by the architectural design. 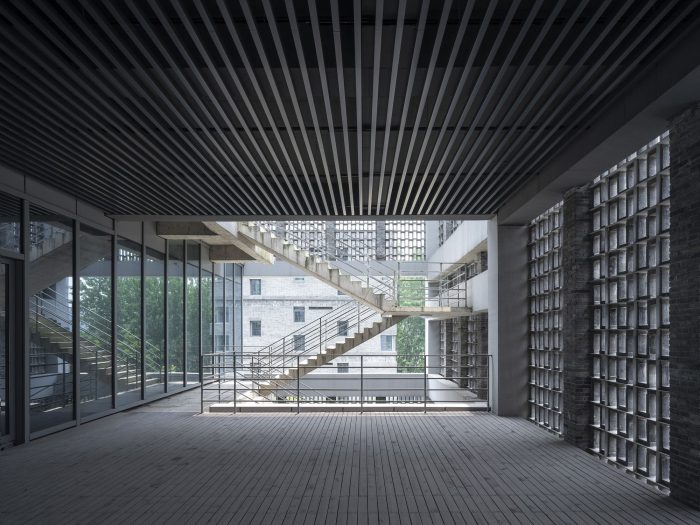 The Conclusion
While human scale remains constant, our perception of it does change, often emboldened by technological inventions, such as automobile. Our ability to move faster and go further has made us to lose sight of our bodily dimensions from time to time and imagine a scale that our physical being ultimately does not relate to. We have to reconsider the scale of buildings and cities, which are meant for human activities or simply human life.

Jiading Mini Block is a test of making urban spaces with a more human scale. So far, the market has responded favorably as a third of rental offices are already leased out. Now we are curious to see if the occupants will step out during lunch hours. With cautious optimism, we hope that there will be municipalities who pick up the signals from Jiading and may envision doing intimate neighborhoods if not entire towns in the near future. 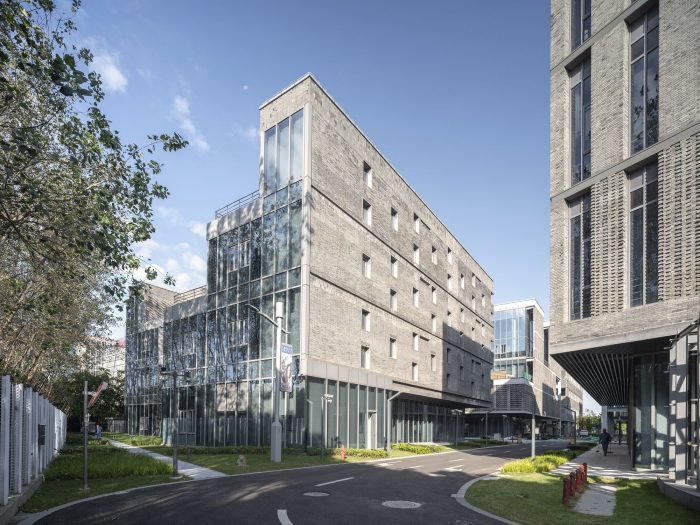