15 of the Most Unbelievably Beautiful Bookstore in the World

Imagine wandering into a bookstore visited by the likes of Hemmingway, J.K. Rowling, or F. Scott Fitzgerald. A bookstore might not seem like an interesting place to visit. All bookstores have the same fixtures: bookshelves and books. But to the well-seasoned traveler, bookstores are more than that. A bookshop is a historical timepiece. It can show the historic character of a town, or it can show innovation and modernity. You can find a bookshop on a gondola on the banks of a river or even housed in a theater. These beautiful bookstores have shown how enduringly timeless a bookstore can be and how a bookstore is a staple that can exist just about anywhere.

This iconic Parisian destination was a favored haunt to Ernest Hemingway, Voltaire, and Rousseau. Situated on Paris’ Left Bank, it was first opened in 1919. This popular bookstore is nothing short of a tourist attraction. Long queues outside its doors are enough to indicate the public’s attraction to this place. The bookstore schedules regular readings with contemporary writers so the place is known to be bustling all year round despite its size. In fact, it has also been known to host writers who can stay there, provided that they also put in some working hours. And if readings aren’t your fancy, they also happen to host a Sunday Tea. 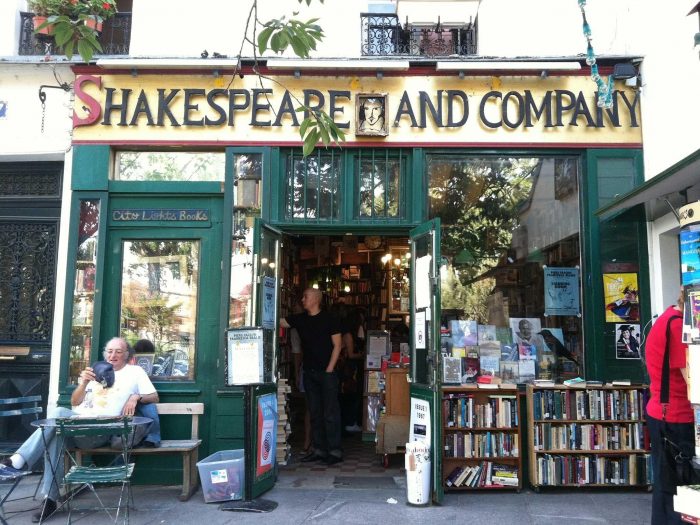 Hailed by the Guardian as one of the world’s most beautiful bookstores is the El Ateneo Grand Splendid. This bookstore is situated in a theater that opened its doors to the public in 1919. Before becoming the grand bookstore it is today, El Ateneo was also a cinema till the 2000’s. The structure itself was designed by architects Peró and Torres Armengol, but it was Fernando Manzone who converted the structure into the bookshop it is today. Despite the change of function, Manzone kept much of the architecture of the theatre itself from its stage to its elaborate balconies. The interior is beautifully captured by photographer Thibaud Poirer in his series ‘Libraries‘. 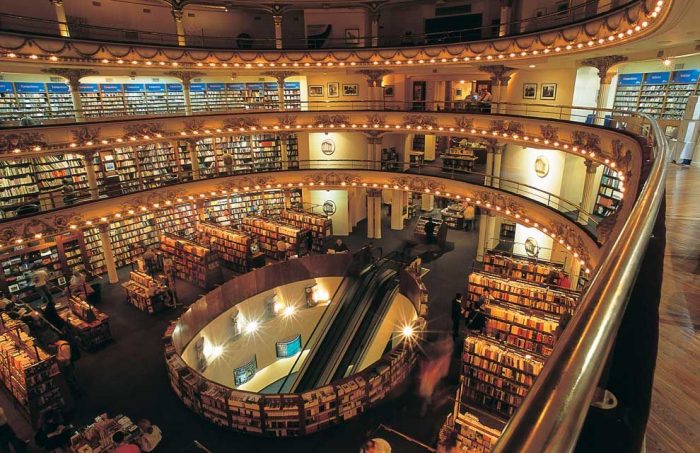 Books strewn across a gondola is a quite unusual sight, but in Libreria Acqua Alta this is the norm. Its winding and chaotic rooms of old texts are part of the charm of the space. One room houses a gondola filled to the brim with books. Another room has a bathtub drowning in literature. And it’s no wonder since the literal meaning of Acqua Alta is “high water,” in reference to the seasonal high tide in Venice. Adding to the charm of this place is a direct view on the Venetian canals. 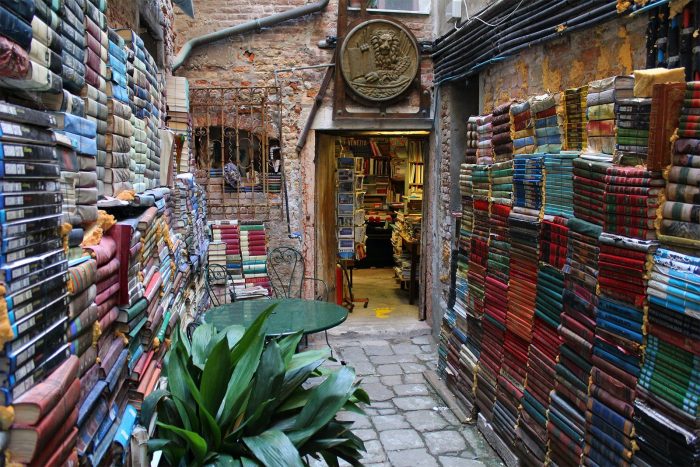 This neo-gothic style bookstore was said to have inspired J.K. Rowling. The winding red staircase in this bookstore is the main centerpiece, and its complemented by a stained glass ceiling with an ornate flower design. Another interesting feature of the space is bronze reliefs of literary figures in between the bookshelves. Also, the store happens to have a small café where readers can grab a coffee, a glass of wine, or even purchase a cigar. 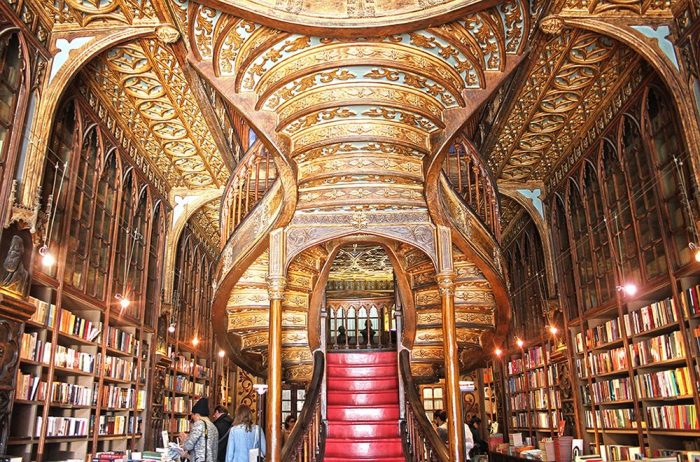 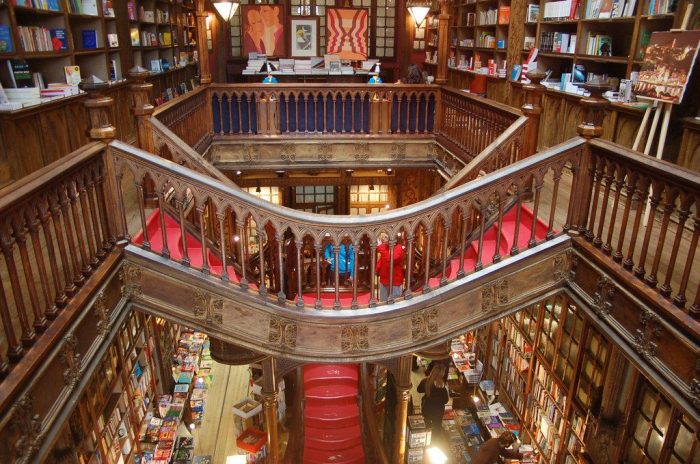 Although this bookstore is a little visually lacking amongst its other counterparts, it is still worth celebrating.  The Strand is actually one of the oldest family-run bookstores in the United States. This shop contains rows upon rows of books from banned books to children’s books to architecture books and fiction. It’s no wonder their motto is ’18 miles of books’. Interestingly enough, this particular branch of this bookstore chain was where musician Patti Smith used to work. 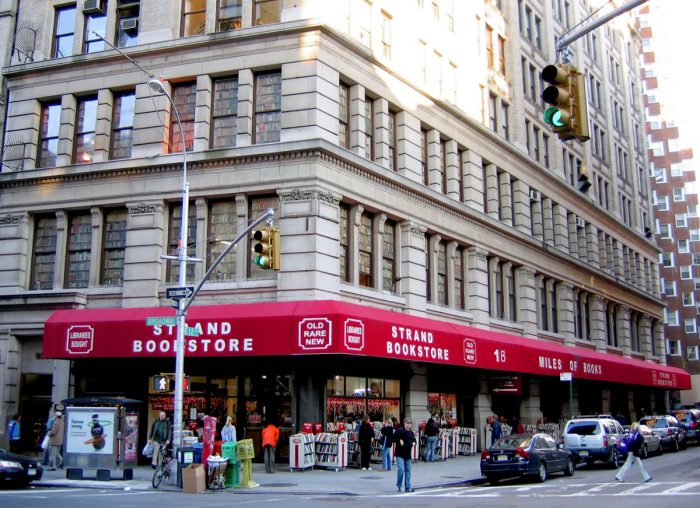 If you’re wondering which of these bookstores is the most beautiful, the answer probably is Polar Maastricht. Formerly known as Selexyz Dominicanen, this bookstore’s origin dates back to 700 years ago 1294 A.D. when it was the Dominican church.  The high ceilings and arched halls are nothing short of a marvel. The building was restored in 2006 by Dutch architects Merkx+Girod who also designed the Supreme Court of the Netherlands. To preserve the architecture of the church while making it into a commercial space, a black steel frame structure was erected to act as a second floor to the bookstore itself. 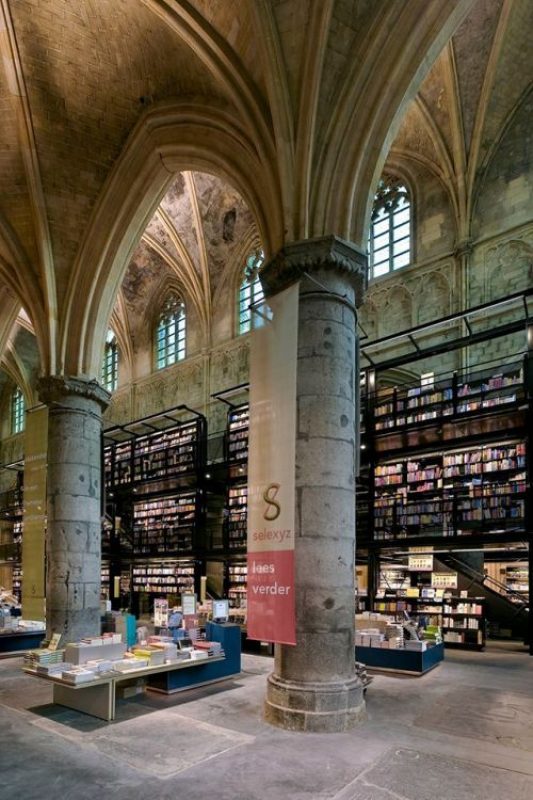 The closure of Alnwick railway station in 1968 would have probably made no difference, was it not refurbished in 1991. The location of this bookstore is certainly unusual, since it is situated in an old closed-off railway station, but what is even stranger is the name of the store.  Barter books actually refer to the fact that customers can barter and purchase their books on credit through offering to pay on their next visit.  The place is perfect for those who want to cozy up and read a book as it has loads of comfortable seating, a café, and even a fireplace or two! 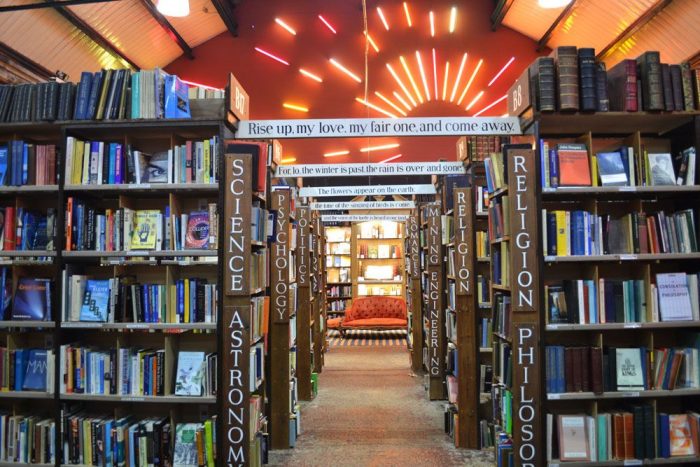 Although it is a lot smaller than all the bookstores mentioned above, this idyllic bookstore deserves mentioning. Housed in a white-washed home in Santorini, with a beautiful sea view, this quaint little cave dwelling of a bookstore serves as a cultural hub for all book lovers on this popular island destination.  The bookstore is owned by Craig Walzer a young Oxford fellow who has handpicked all the books that line the shelves and floor of the shop. 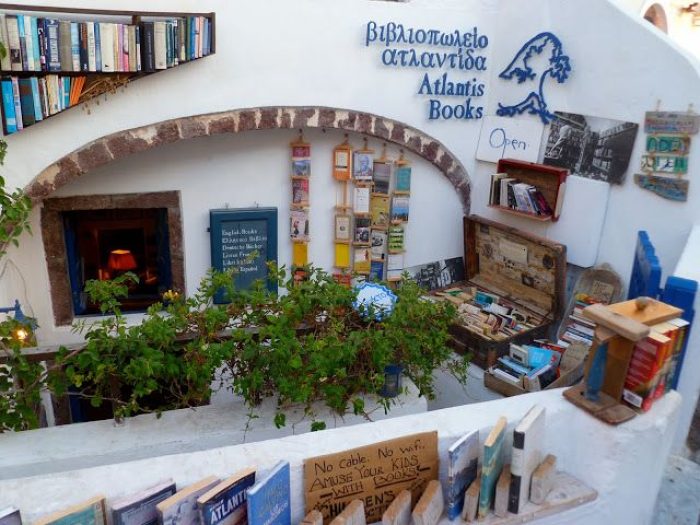 The fear that books are a dying breed is not entirely new. Still, this is probably why The Last Bookstore deserves its name. This bookstore is a treasure trove for used books and records, and it is also a hub for all kinds of events. What makes it even more whimsical is its famed tunnel of books! Based in an old bank, this bookstore is nothing short of grandiose, with marble columns lining its halls. 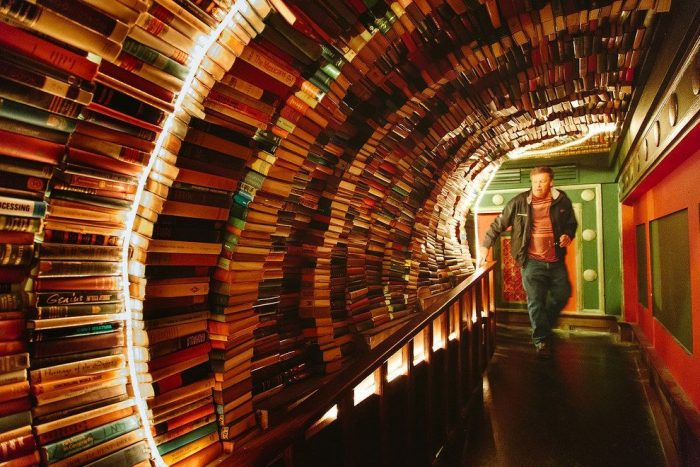 Via The Last Bookstore

The significance of Bart’s books lies in the fact that it’s all outdoors: books, bookshelves, and all. Californian Richard Bartinsdale opened this bookstore in 1964. In those days, Bartinsdale did not really bother with a cash register and would have cans on the bookshelves where customers can just pay for the books themselves. Bartinsdale still applies a version of this honor system today where customers that arrive after hours can grab a book and drop their money in the designated slot. The bookstore is almost like a maze with the bookshelves creating a pathway for readers inside. 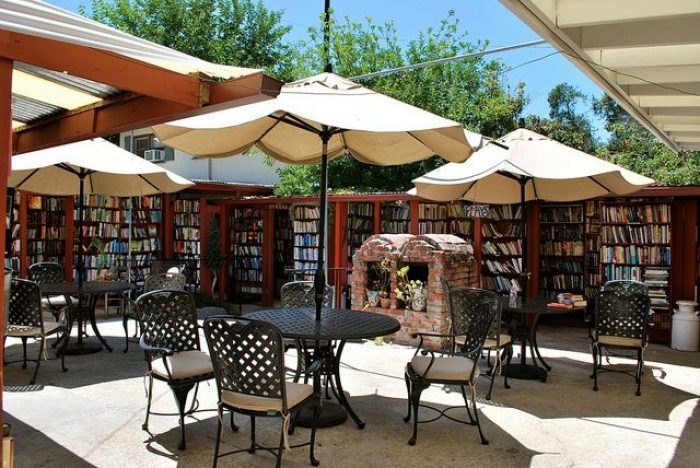 Divided into eight rooms, this bookstore/restaurant combines two creature comforts: food and books. Each room has its own unique vintage design. The decorations include a caravan in the travel section, vinyl records lining the walls in the music section, and model railway tracks winding their way across the children’s section. Furthermore, there is a small fiat that sits in the middle of the cooking section, giving an overall 50’s vibe to space. 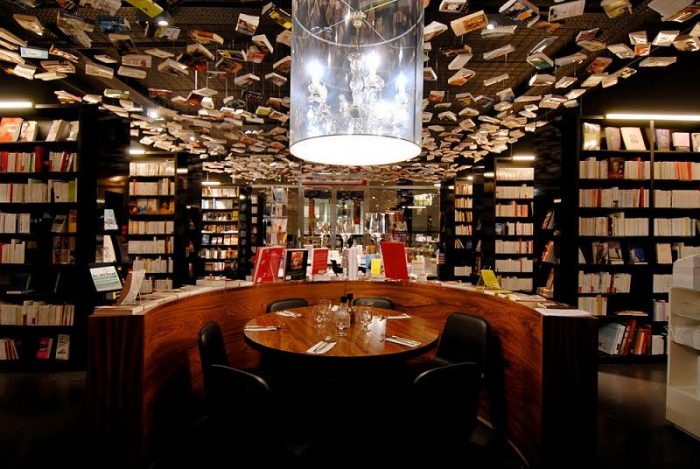 Via Cook and Book

Picture a bookstore in the middle of a forest. That’s exactly what this bookshop is; with hanging foliage from the shelves and plants every which way, to even green winding handrails that look like vines. Every detail in this bookstore is designed to make it seem like a paradise of pages. The bottom floor of this two-story building holds a café where customers can enjoy a cup of coffee beneath the thick trees. Additionally, its top floor, which holds the bookshelves, is lined with deep green handrails accompanied by the light undertones of a hardwood floor. 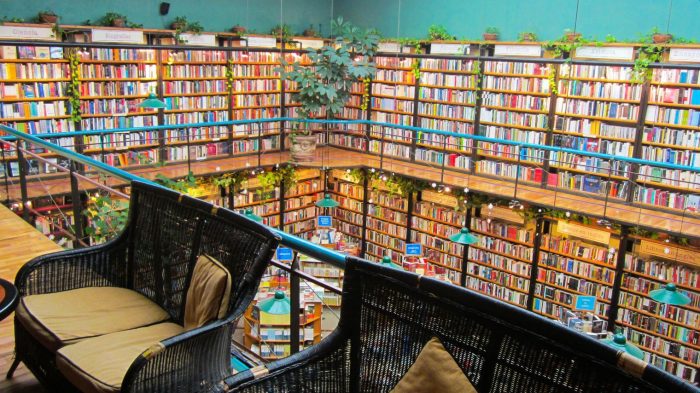 A 24-foot-high ceiling and a modern industrial interior are the main features of this bookshop. The launching of Powerhouse arena in 2006, by Powerhouse publishers, created a buzz in the area of Brooklyn. Advertising itself as a “laboratory for creative thought,” space is a hub for different cultural happenings, from readings to musical events. 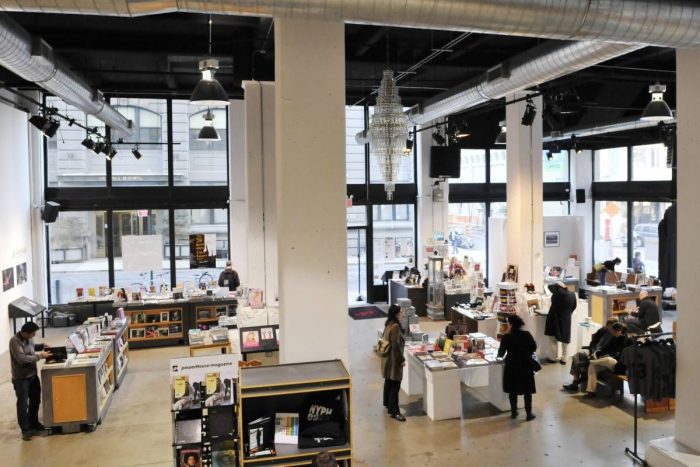 This bookstore owes its design to architect Alvar Aalto who fitted the ceilings with angular glass skylights. The modern design of the structure is sleek and business-like, but the unique skylight is what is really turning heads. The three-story complex may appear somewhat dull on the outside, but, on the inside, the atrium provides for ample lighting and warmth. The effect is complemented by the smooth lines of the white marble interior. 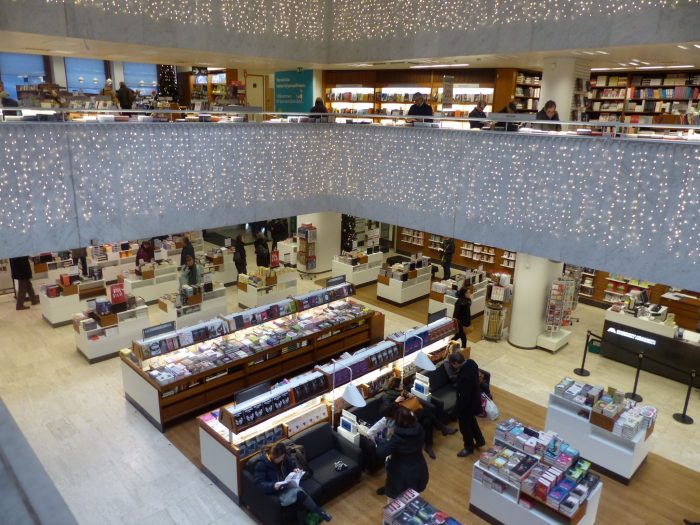 Sleeping inside a bookshelf is all part of the experience at this bookstore/ hostel. Since books and sleep go hand in hand, the bunks, here, are part of the bookshelves which carry more than 5000 books. The cost per night at this Kyoto-hostel starts at $39. 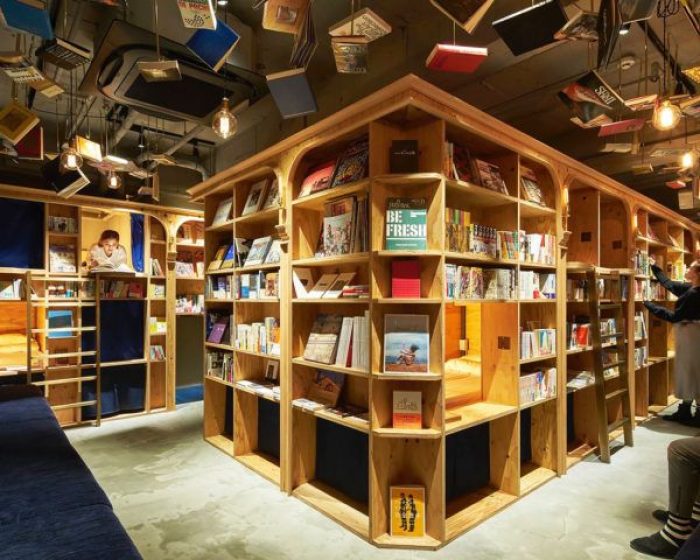 Via Book and Bed Kyoto

Then and Now : A story of the 7 Great Buildings That America Lost