Following six years of construction, Suzhou Urban Planning Exhibition Hall designed by AUBE was completed in 2018 and officially opened to the public. The Exhibition Hall takes Lingbi Stone, the ornamental stone of Suzhou, as inspiration and establishes a cultural landmark embellished with regional characteristics for Suzhou New District by interpreting the stone’s charming features of being thin, airy, porous and creased with contemporary design techniques. It also employs low-tech ecological energy-saving strategies so as to reduce building energy consumption. 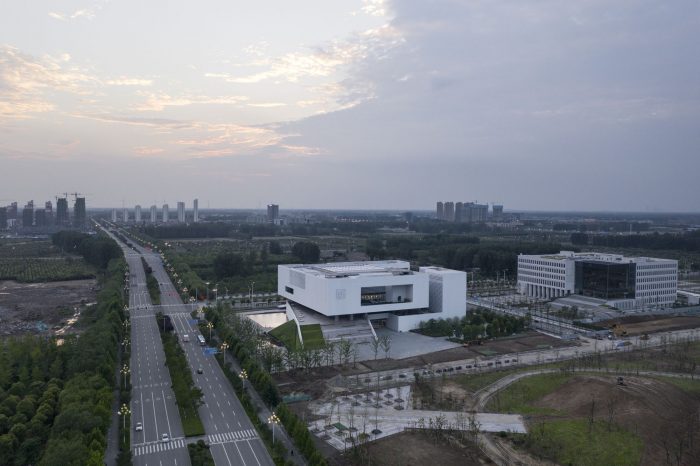 Located in the northern part of Anhui Province, at the junction of the four provinces of Anhui, Jiangsu, Shandong and Henan is Suzhou, one of the time-honored birthplaces of Chu-Han Culture and Huai River Culture. In recent years, with the progressing improvement of urban agglomeration policies in China, in order to implement the new requirements of the integrated development of the Yangtze River Delta region strategy, Suzhou has been working on the upgrade of its infrastructure connectivity level with key cities including Xuzhou and Suqian within the Huaihai Economic Zone, aiming to progressively promote regional coordinated development, improve the city into a sub-center of the Xuzhou metropolitan area and accelerate its integration into Huaihai Economic Zone. 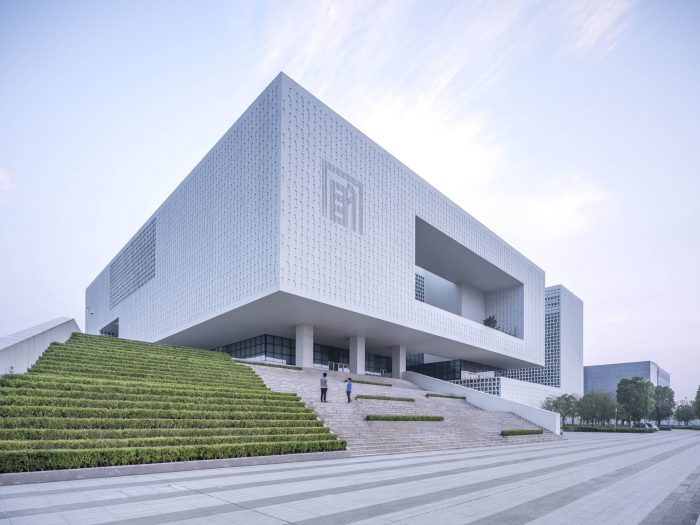 Situated within an open space in Bianbei New District of the city, the design challenges of Suzhou Urban Planning Exhibition Hall mainly lie in how to define the urban space as well as how to utilize the landmark building as the catalyst of urban vitality. The urban planning exhibition hall has become an emerging type of cultural landmarks since 2000; however, if the architecture only values its unconventional imagery without rich functions or any operational plan, this kind of display content that has great potentials to interact with the public will be wasted.

Therefore, Suzhou Urban Planning Exhibition Hall proposes to design a planning exhibition hall for civic engagement. With its architectural space being open and inclusive, the Exhibition Hall will actively welcome the civic life as part of if, and organize activities for the public that are richly entertaining. The design scheme has deeply dug into the local context and its uniqueness, and hence forms a spatial organization that naturally makes the architecture a regional cultural landmark of the area. The square-shaped building sits on one side of the square, covering two major functions of display and office. Inspired by Lingbi Stone, it abstractly portrays with contemporary techniques a cultural landmark that is solid but airy, simple yet versatile, and constantly changing, which creates a variety of public spaces, offering multiple possibilities of use to the citizens. 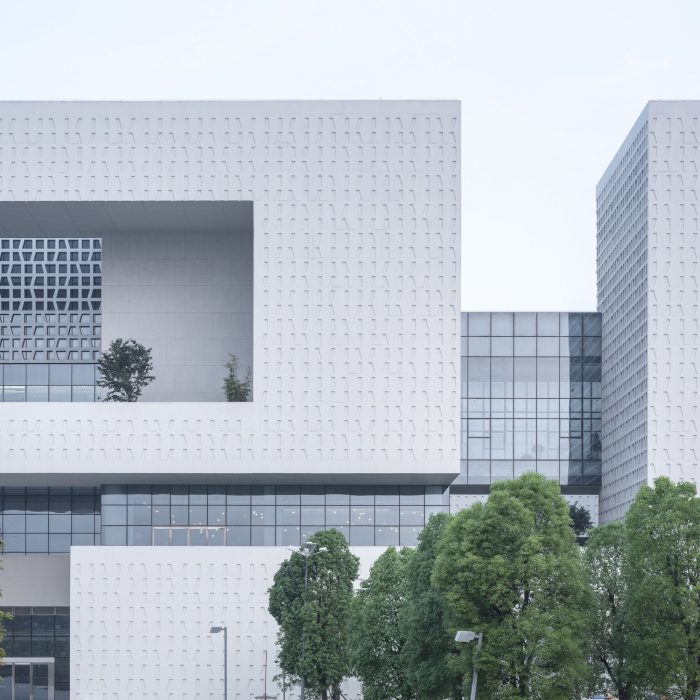 The main entrance is set on the ground floor, while the grand steps on the side of the building can also guide the pedestrian flow up from the square to the secondary entrance on the first floor. The gesture of “vein cut”cantilevers part of the first floor to allow for a covered venue of public events, and the “cross cut”, on the other hand, divides the building volume above its base, establishing an integral architectural image while keeping the separate functions of exhibition hall and office relatively independent. The office part is placed on the north side, echoing the administrative center to the north of the Planning Exhibition Hall. The cuts, both horizontal and vertical, help reduce the sense of oppression evoked by the monolithic volume of the building, which stands for “thin”.

In order to further create more public spaces of diversity and fun, a number of atriums, side courtyards, terraces and gardens can be found scattering throughout the building. Bridges, partitions and glass screens also facilitate the movement between interior and exterior spaces, forming a pleasant relationship between the solid and the void. The exhibition spaces are interspersed with courtyards, where each step makes a difference, composing a series of indoor spaces with rhythmic variations; in the meanwhile, the spatial hierarchy gets enriched and all functional units are interconnected vertically, which stands for “airy”. 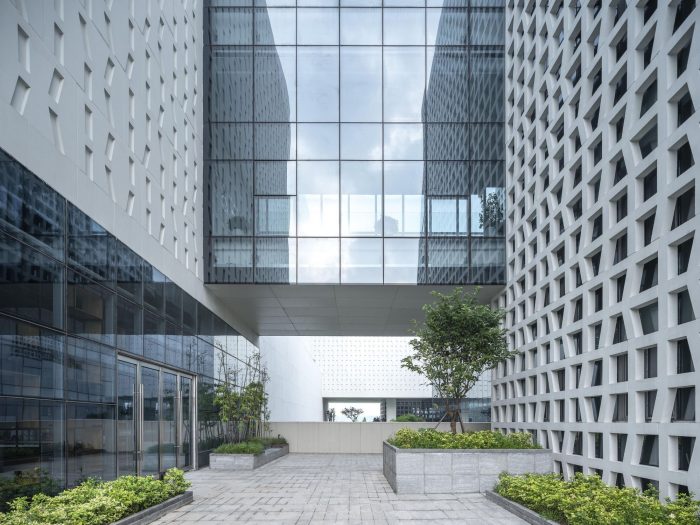 The design takes advantage of “narrow lanes”and “courtyards”to form a”hollow structure with multiple wind tunnels”. The “narrow lanes”conform to the dominant wind directions during the summertime, introducing the natural winds to enter at a low level and come out high, which, in combination with the updraft of heated air, strengthens natural ventilation; in the winter, “courtyard”plants will block the prevailing winds and thus improve indoor comfort, which stands for “porous”.

The facade design derives from the creased appearance of Lingbi Stone. Simplified and abstracted, a pattern composed of the positive and the negative is formed and reinterpreted by the advanced material of GRC concrete, and with reliefs on solid walls that do not require natural lighting, the facades celebrate the play of light and shadow, which stands for “creased”.

Having been open to the public, Suzhou Urban Planning Exhibition Hall not only performs as an exhibition space of urban planning, but also provides the city with a public, open, vibrant and experiential place. It will fully explore its nature as a cultural landmark to attract citizens to stay and enjoy, enhancing its display effect of the Hall. The multi-layered architectural space integrated with cutting-edge display technology will also bolster the visiting experience. Suzhou Urban Planning Exhibition Hall will soon become the brand new business card of Suzhou New District, activates its surrounding areas and helps improve the city’s image. 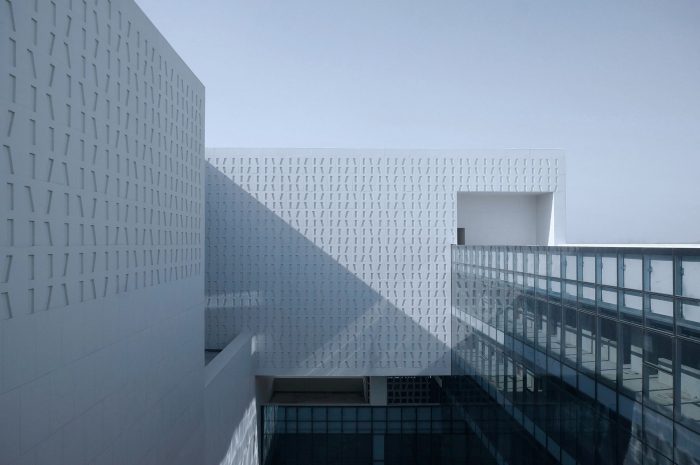