‘ Pop-up Building Milan ’ is an artistic interpretation of art, culture, and architecture of Milan, trifling across the walls of a Milanese courtyard. A composition created with unconventional materials such as cardboard, adhesive tapes, varnish, cartons, and zip ties, blithely peaking meaning and understanding of a place.  Daniel González, an Argentinian contemporary artist, hereby simplifies the entire city of Milan into a few components of rudimentary shapes and lucid forms. Pop-up Building Milan is actually a part of the Marsèlleria Permanent Exhibition. Erecting a set of frames over the walls of this patio, this Pop-up Building captivates a visitor with its fairy tale imagination of Milan’s identity and past. Not necessarily, everything in Milan has to be polished and presentable, which is why the artist surrenders the entire 250 sq. m facade to an intuitive and radical efflorescence of a soulful naiveté. Third in a row, Pop-up Building Milan follows the other two works by Daniel González, whereby he’s showcased Rotterdam and New York, through similar site-specific pop-up installations. His work reflects his research on the urban morphology of different cities, portrayed colloquially through hand-stitched banner painting sequins. What’s unique about this work of his, is the intended adhocracy. It reflects the contrast from the elegance of Italian vogue. 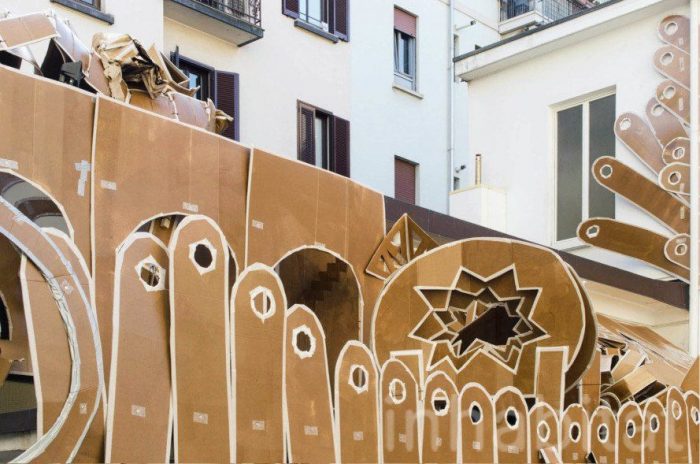 This ensemble evolves from the idea of articulating complex impressions of a city, including the abstract schema of the city, its architectural traditions, and sophisticated finesse, through the simplest means with fundamental motifs. The surreal atmosphere created by this pop-up city within the court is a vivid reality produced by one’s imagination. Besides the here and there camouflaging clues about the city’s culture and landmarks, there are other metaphors precisely incorporated into this unfolding. González uses various techniques such as Japanese Kirigami (a variation of origami that includes cutting of paper and not just folding it) to create folded protrusions from the two-dimensional cardboard planes, to create interpretations of local landmarks like the Pirelli Tower, Lambrate Industries, and the Torre Velasca. There are depictions that also demonstrate M.C. Escher’s paradoxical illusions and Bernini’s transient Baroque contributions. Not to forget the mandala diagrams powered by electric engines, which add to the delirium of this frenzied place. If you’re in Milan before 31st October or are soon planning to drop by, this is something you might not want to miss. A stroll into this little wonderland would lead you to an evanescent window peeping into the parallel city, existing within Milan.