eVolo’s 2014 Skyscraper competition consistently promotes the most creative and adventurous thinkers of the future. On an almost imaginary scale, UK based designers Christopher Christophi and Lucas Maxarrasa have taken dynamic architecture to the next level.

Their design proposes a vertical structure that acts as a platform or hub for trains. As countries continue to invest greatly in high-speed railways, cities will need to continue expanding upwards to address the issue of the population’s gravitation towards urban metropolises by the year 2075. An attempt at answering these needs is by the proposal’s consideration for the role that rapid transportation can play in the cities future. 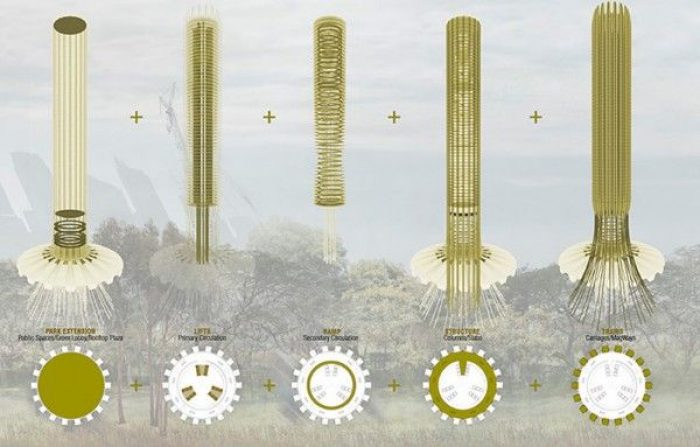 By flipping the station from its traditional orientation of horizontal and planar to vertical and spherical, their submission literally implements a moving façade and minimized land use. In addition to its magnetic structure instead of train rails, it also aims at promoting a reduction in carbon dioxide emission, increased energy security, and a reexamination of the world’s international business and trading. This infrastructure is thus deployable to any city around the world.

The verticality of the structure as mentioned allows for more ground space to be taken for the use of urban parks and other public areas at its base. This creates a welcoming atmosphere before the passengers ascend upwards through the atrium to their train. In order to ensure the comfort of the passengers, when the train ascends or descends from the facade of the building, it pivots in a manner similar to a Ferris wheel. Allowing for the passenger to remain in an upright position facing towards the city.