Caress of the Gaze Cape

Are you fed up with the creepy looks of certain individuals who make it a habit of invading your comfort? Do you feel the need for ‘something’ that allows you to wear whatever you wish without any uninvited exposure? It seems as if Behnaz Farahi has an answer to such worries. While working for Autodesk as a part of a project, she has developed a Neck cape outfit named ‘Caress of the gaze’, which can mold its form according to the eyes of the viewer. Farahi is an architect as well as an Interactive Fashion designer. She developed this outfit while working for Pier 9’s artist-in-residence program of Autodesk co-sponsored by Mad workshop foundation. It is a 3d-printed outfit with almost life-like properties and is supposed to act as an artificial skin. The material used in making this neck cape is actually a combination of multiple materials and their properties thus allowing it to inherit various tendencies.

“This project was inspired by nature both in terms of its morphology and behavior, especially various reptile and animal skins, such as snake and fish scale systems. This technology allows the fabrication of composite materials with varying flexibilities, densities, and can combine materials in several ways with different material properties deposited in a single print run. Inspired by the flexible behavior of the skin itself, this outfit, therefore, exhibits different material characteristics in various parts of the body ranging from stiff to soft.” Overall, this neck cape is an attempt to combine art and technology with fashion to create innovative and interactive clothing. Although not practically implementable enough, it is still an advancement in the ‘fashion+tech’ field and might lead to some concrete and mass-attracting trend.  At this point though, one must admit to the fact that fashion is still much more about aesthetics and comfort, and till the time technology doesn’t run in sync with them, experiments such as this tend to remain simply prototypes. 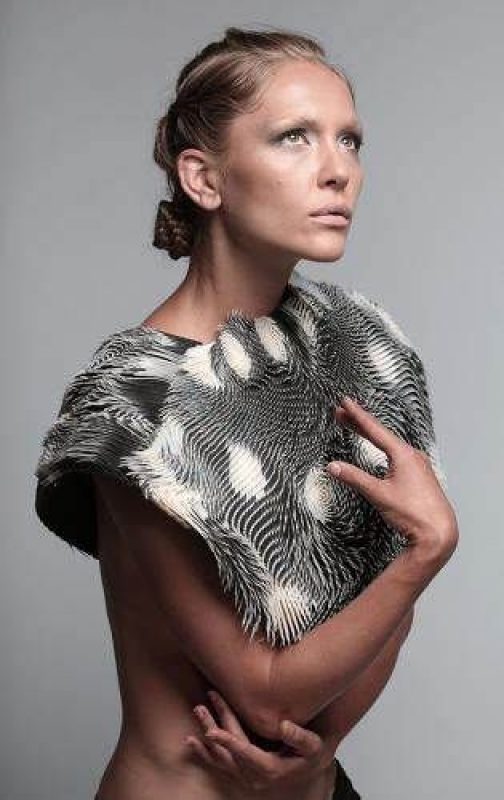