After a seven-month nationwide competition, the design for Washington DC’s 11th Street Bridge Park by OMA + OLIN was unanimously selected by the competition jury. The design team was asked to transform an aged-out freeway bridge into a new civic space over the Anacostia River. The 11th Street Bridge Park, which aims to connect neighborhoods east and west of the Anacostia River with an elevated park on an unused bridge, received a $1.2 million grant. The grant, which comes from the Kresge Foundation, brings the total capital campaign funds raised for the park to more than $11 million. The nonprofit spearheading the project hopes to raise to $45 million. More than $8.3 million of that will come from the District. 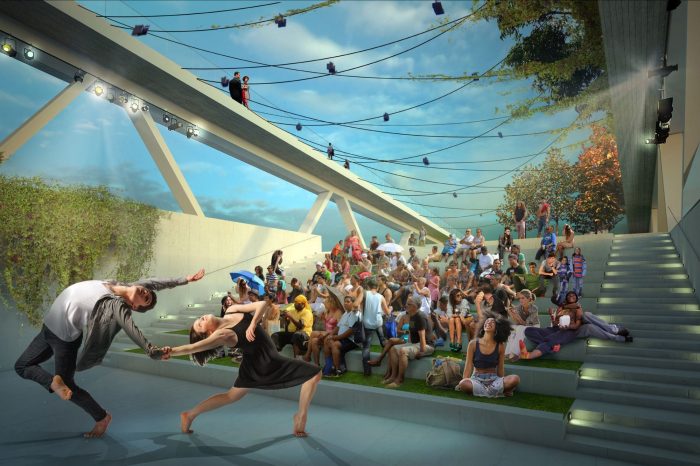 Partner at the OLIN Hallie Boyce commented, “the 11th Street Bridge Park project is an incredible opportunity to contribute to the civic fabric of Washington, D.C. through the design of an iconic, multi-functional landscape which promotes the health of the river and its adjacent communities acting as a model both nationally and globally“.

The design for the 11th Street Bridge Park – the Anacostia Crossing – is a place of exchange. The park will connect two historically disparate sides of the river with a series of outdoor programmed spaces and active zones that will provide an engaging place hovering above, yet anchored in, the Anacostia River. To create this place, the bridge park have been designed as a clear moment of intersection where two sides of the river converge and coexist. It will offer layered programs, presenting a new neighborhood park, an after-hours destination for the nearby workforce, a retreat for residents and a territory for tourists to explore. Paths from each side of the river operate as springboards sloped ramps that elevate visitors to maximize look-out points to landmarks in either directions. Extending over the river, the Anacostia paths join to form a loop, embracing the path from the Navy Yard side and linking the opposing banks in a single gesture. The resulting form of the bridge creates an iconic encounter, an ‘X’ instantly recognizable as a new image for the river. While the bridge is a unique and iconic structure, its character and essence are rooted in making this river landscape accessible to the community. Through programmed activities, the bridge will showcase the region’s unique cultural and natural history. To encourage visitors to spend time on the bridge and neighboring communities throughout the year, amenities for comfort and refreshment (restrooms and food), mitigation of climate extremes (shade and warmth) and opportunities for seasonal programming are provided along the entire length of the bridge. The bridge provides a gateway to events with strong roots in the adjacent communities. 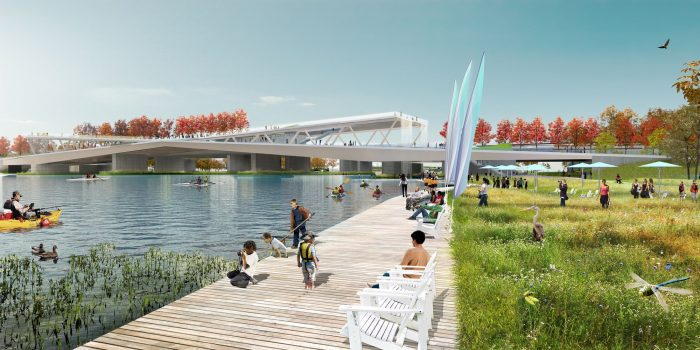 The intersection point of the two paths shapes the central meeting point of the bridge – an open plaza – that provides a flexible venue for markets, festivals and theatrical performances held throughout the year. The paths that frame this plaza further enhance the bridge as a hub of activity, providing a sequence of zones designated for play, relaxation, learning and gathering. The paths also form elevated platforms on a 5% slope with views to the Anacostia River, the activities on the bridge and the prominent landmarks within Washington DC and Anacostia. These platforms simultaneously provide shade and shelter for the cafe on the southeast side and the performance space and hammock grove on the northwest side. At each side, a waterfall marks their terminus and reconnects them to the river below. On the east side, this waterfall is linked to an active filtration system that, together with new wetland areas adjacent to the bridge piers, works to clean the river around the Anacostia Crossing. The activated zones and multiple levels of the Anacostia Crossing also bring visitors down to the river itself. A series of voids along the bridge provide spaces for play and access down to the river itself. The performance space and cafe are partially carved into the body of the bridge, creating intimate zones with views to the waters below. Together, these areas allow visitors to engage the river from multiple vantage points, from above to take in its majesty, or to engage with the waters for boating and recreation.

Organizers are also planning to bring back the Anacostia River Festival in 2016, the Cherry Blossom Festival, an affiliated event that served as the official closing event of the popular spring festival in D.C. More than 6,000 people attends the festival in April, which Kratz and his team considered a huge success. Bloomberg will again be a title sponsor for the Anacostia River Festival, which will be held April 17, 2016.