German-based Max Planck Institute for biological cybernetics (MPI) and Fraunhofer IPA has co-developed a cable-driven parallel robot that is the first of its kind for transporting humans while, at the same time, setting new standards in terms of workspace, acceleration and payload for a motion simulator. Commonly now, cable robots meet the high requirements in the production of environments. The systems are larger than conventional robots in size and payload by one to two orders of magnitude as the end effectors are allowed to freely move with high accuracy by up to eight cables and winches. The motion of the cable-driven stimulator is controlled by eight unsupported steel cables that are attached to the winches. And unlike conventional motion stimulators, the use of the eight steel cables makes it possible to reduce the moving mass and scale of the workspace to any desired size. The cabin can accelerate by 1.5times gravitational acceleration along programmable paths inside a 5 x 8 x 5 m³ workspace through a 348KW drive power. The simulator can be adapted to different cabins to be used for a different range of scenarios by reattaching the cables in under an hour.

Philipp Miermeister, a member of Fraunhofer IPA’s cable robotics working group headed by Professor Andreas Pott, has contributed much know-how to driving forward the design and realization of the simulator. Scientists have succeeded in advancing this technology, which has been previously used for automation solutions in the field of Intralogistics, to enhance the multimedia experience. They implemented the control algorithms, in addition to developing a light-weight rugged carbon-fiber cabin which is capable of withstanding the dynamic loads during the robot operation. The cabin, entirely made of carbon fiber tubes, has a frame that maximizes the cabin’s usable volume with a diameter of 260 cm for projection surfaces and cockpit instrumentation, allowing it to be used for high-quality projections along with realistic operator interfaces. Furthermore, the 80kg frame can accelerate at a high speed while withstanding high forces since, in operation, the cables can pull off the outer structures with a load of up to 1.5 tons. These features of the cabin starting from its large workspace to its dynamic capabilities make the stimulator suitable for a wide scope of VR applications such as driving and flight simulation as well as investigation of basic human perception processes. 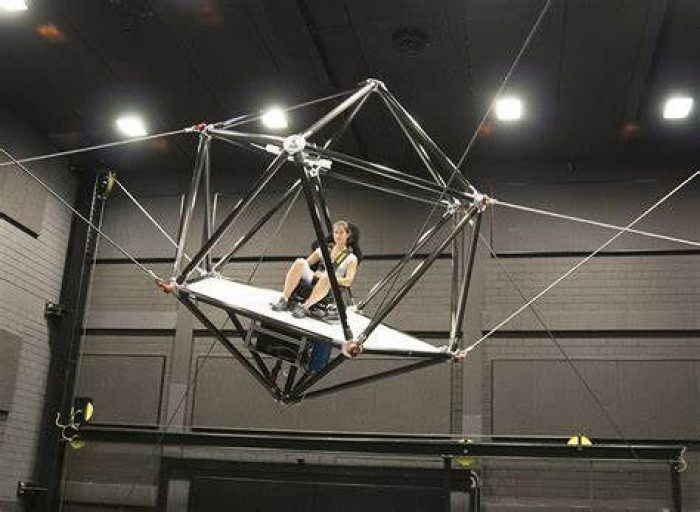 Metematerials technology creating mechanisms from a single piece of plastic