The inception of perspectives is rather imperative. The illusion of depth contained within the context of coordinates, the arrangement of shapes on a flat surface. Otherwise, the assembly will remain affixed within two dimensions. Implementing a rather anomalous stretch of the imagination, life in 2D would have been everything, literally- a clutter of a humongous set of details- close-ups, hairs, the weave of the bedsheet, the molecules of the face. For 30 years, Peter Kogler has been emblazoning floors, walls, and ceilings with hypnotizing line designs that seem to proclaim one’s perception in the most unnatural ways. For his most recent work Kogler, once again, takes an ordinary “box-shaped” space and transforms it into a “virtual maze” of time and space. Intersecting lines proffer “feeling of undefined movement and insecurity,” in one of Kogler’s mind-bending rooms of black print against a white background. Fortunately, Austrian artist Peter Kogler employs perspectives on rather amicable terms, with his ” perspective rooms”. He imagines rooms where the walls, the floor, and the ceiling are decorated with 3D patterns playing with reliefs and perspective effects. By utilizing a 3D graphic program, Kogler generated the intersection of illusions in space. Large printed posters were put on walls in order to come to this fascinating result. 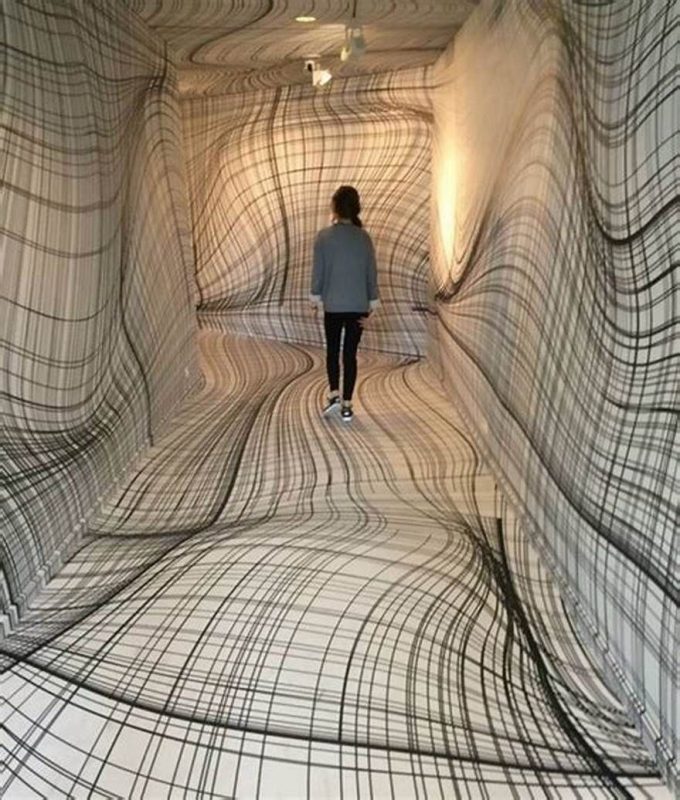